The Apple AirPods 3 is expected to launch in the coming weeks. We have gathered a decent chunk of information about this device ahead of the launch. So read this article to find out everything we know so far about the AirPods 3. 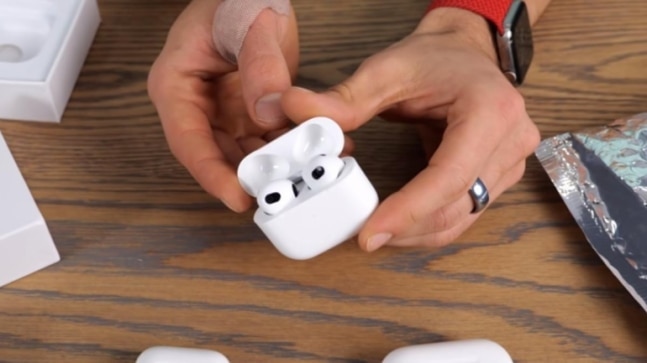 Rumours around the launch of Apple's upcoming Airpods have been making rounds for quite some time. We had previously heard that the Apple Airpods would make a way in March or during the Spring Loaded event on April 20, both of which never materialized. That being said, strong assumptions are being made about the arrival of Apple AirPods 3 in the coming weeks. In addition to that, Apple may also release Apple Music HiFi alongside.

We know that the Apple AirPods 3 may feature a similar design to the AirPods Pro, smaller stems, no interchangeable tips or ANC through previous leaks. This is supposedly to cut down on the pricing of this particular device.

--However, the same website later leaked another picture of the Apple AirPods 3 with no tips. This has been confirmed by some other websites, so we may not see tips on the upcoming Apple AirPods. Photo Credit - EverythingApplePro, Apple AirPods 3 case ( clone) vs AirPods Pro case
--The latest video released by EverythingApplePro gives us a closer look at the Apple AirPods 3. Right off the bat, we can see that case is less comprehensive and tall, as suggested by previous leaks. Moving forward to the design of the clone, it appears to have smaller stems and no tips. Also, the driver housing is a little narrower when compared to AirPods Pro.

--We have also heard that Apple is working on a new wireless chipset that will be included in Apple AirPods 3. This new chip, supposedly called U1, will improve battery life, range and bring a few more additional features. --The upcoming AirPods may also miss out on features like Active Noise cancellation and dust and sweat resistance. Like mentioned before, this is probably to reduce the pricing of the upcoming Apple AirPods 3.

--Audio 52 says that the Apple AirPods 3 may borrow the "pressure relief" function of the AirPods Pro that uses small vents on the earbuds to release the pressure that builds in your ear canal while using them.

--There's also a rumour that says Apple may use Bone conduction technology for "Multipath audio stimulation using audio compressors" on future AirPods. Moreover, AirPods 3 may feature similar touch controls as the AirPods Pro rather than the single and double-tap gestures available on current AirPods models. Additionally, we could see Dolby Atmos and spatial audio support on the Apple AirPods 3.

There have been several leaks around the launch date of the AirPods 3, none of which have turned out to be true. Now we hear that the upcoming AirPods will launch in the coming weeks. There's no word Apple around the same, so that nothing can be taken for sure as of now.

We do not know about the exact pricing of the Apple AirPods 3. However, a leak claims that the Apple AirPods 3 will be 20% cheaper than the AirPods Pro and will be priced at $199. Whereas another report suggests a price of $150. We predict that Apple may go with the latter mentioned pricing, which converts to Rs 11000 roughly.

Redmi Watch gets listed on Flipkart ahead of May 13 launch, here is what we know so far