The watchOS 7 brings a host of new features but they are more of just improvements to the existing ones. 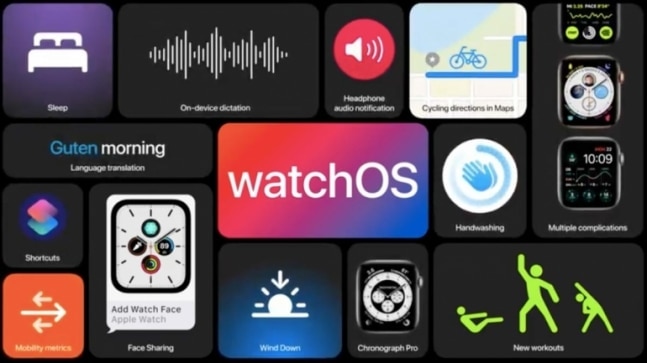 Apple Monday took the wraps off the latest version for its Apple Watch that has constantly stayed on top of the wearable market. The Cupertino-based company launched the watchOS 7 at its online-only WWDC event, alongside the iOS 14, iPadOS 14, macOS Big Sur. The Apple Watch will soon be able to natively track the sleep cycle, in addition to featuring a new Fitness app and a new dance workout routine added. The watchOS 7 is now available in developer beta, while its public beta will be released next month and the stable release will come out in the fall.

watchOS 7 brings a host of new features that are aimed at polishing the last year's version more than defining it from scratch. The latest version of the operating system for Apple Watch brings sleep tracking, which has been one of the most-demanded features. The native sleep monitoring on watchOS 7 will let you set bedtime and wake-up alarms, which will use Apple Watch's vibration system to alert you. The sleep tracking is managed by the Sleep app, which works in sync with the paired iPhone to prepare a sleep chart.

There is a Wind Down mode on the watchOS 7 that will enable shortcuts defined on the iPhone for when you are going to bed to waking up. This includes turning on the Do Not Disturb mode, playing soothing sounds while going to sleep and ringing alarm and playing energetic music when you wake up. The feature will also alert you when the battery on the Apple Watch needs to be charged before you go to bed or when you wake up the next morning.

Apple is also introducing a separate Fitness app for Apple Watch, which is a renamed version of the Activity app, with four new workouts, including Dance, Functional Strength Training, Core Training, and a Cooldown after the workouts have been completed. The Dance workout has different styles, including Bollywood, Jazz, Salsa, and Zumba among others. All the data of workouts is logged into the Health app on the iPhone and can even be shared with friends.

With watchOS 7, the Apple Maps is getting support for cycling, along with features such as elevation changes, bike lanes, and busy roads to avoid. The Cycling mode also has search functionality to locate the nearby repair shops and cafes. The mode also keeps a track of the heartbeat while cycling so that the workout is also achieved.

Apple is also stressing hygiene that should be practised to avoid contracting the covid-19. With watchOS 7, there will be a handwash detector that will identify the movement of hands and the sound of water to figure out if you are washing your hands and start a countdown to tell you how long you should wash your hands for. When done, there will be a sound and a vibration to tell you have achieved the recommended goal for hand-washing.

The watchOS 7 also brings new watch faces and the ability to create the custom ones. The watch faces can also be shared with friends in iMessage, App Store, and even social media with the feature called Face Sharing. Moreover, Apple is enabling developers to create watch faces relevant to their apps for the Apple Watch. Apple is calling these on-screen widgets Complications, which will essentially allow you to use different tools of an app on the home screen of the Apple Watch.

Other features include a compact and more coherent Siri, which will now provide real-time translation in up to 10 languages. There is on-device dictation and Siri shortcuts as well.