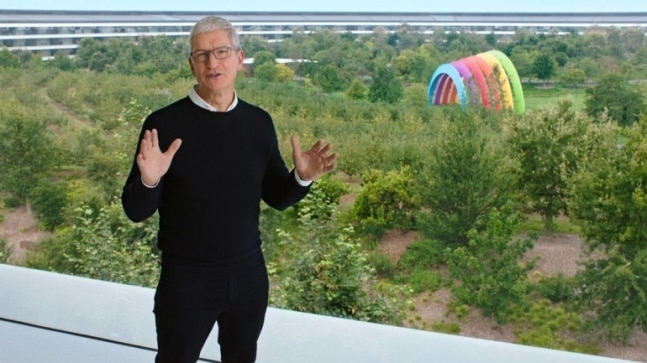 Tim Cook during the September 2020 event from Apple Park

Apple is working on smaller and thinner displays that will be used in upcoming AR devices. According to a report, the Cupertino-based giant has partnered with Taiwan Semiconductor Manufacturing Co (TSMC) to develop micro OLED displays. Interestingly, the report says that TSMC is working at a secret Taiwan lab.

Nikkei Asia reports that the new displays will be used on the upcoming augmented reality (AR) devices. The news about Apple's AR devices came last month when Bloomberg reported that the company was working on an AR glass codenamed N421. It added that the product could be years away from reality but claimed that Apple was targeting 2023 to launch its AR product line.

The new report adds that the company plans to develop a "radically different" type of micro OLED display which will be built directly onto chip wafers. Citing sources briefed on the matter, the Nikkei Asia report further explains that unlike traditional LCD screens or OLED displays that use glass substrates, the micro OLED displays will likely be smaller and use less power. It adds that this material will make it suitable for wearable AR devices.

Apple is using an experts panel who understand displays to learn the know-how of such small display. The report adds that some parts of micro display manufacturing can be done in the existing TSMC production facility.

It further adds that the secretive lab for Apple's micro OLED display is in Longtan District in the northern Taiwanese city of Taoyuan. It also hints that the company is working on micro-LED tech and has trial production units in place.

Talking about experts, the report says that Apple hired veterans from Taiwanese display maker AU Optoelectronics as well as from Japan and more places. Citing sources familiar, the report claims that people signing up for the new work are signing a "strict non-disclosure agreement."

It's worth noting that Apple was earlier planning to launch its AR devices in 2020, however, the pandemic caused supply chain issues and led to delay in the project. Last year, Apple analyst Ming-Chi Kuo said that the company could be expected to launch the long-rumoured AR devices by 2022.

Poco M3 sells more than 1.5 lakh units in first sale, to be available next on February 16