Apple made a number of big announcements at the 'Time Flies' event. One of the announcements was the new iPad 8 and iPad Air 4. Here's all you need to know about them. 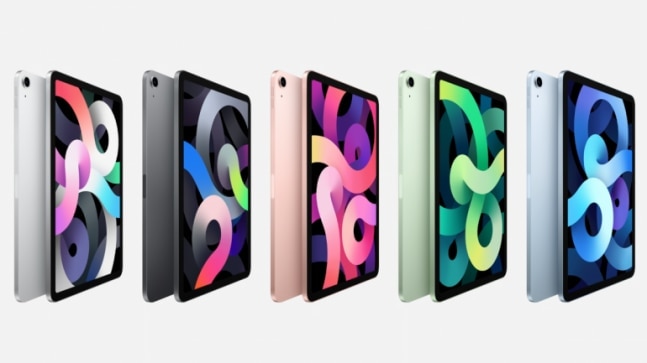 Cupertino based tech giant, Apple, hosted another launch event today where it took the lid off new products, including the Apple Watch Series 6 with blood oxygen monitor which the company claims can now help track blood oxygen levels, and also let users know of information about heart conditions.

Dubbed as the "Time Flies" event, the virtual show did not see the company launch the much anticipated iPhone 2020, but instead saw Apple make important announcements about new iPads that it is introducing this year.

While all of the announcements made by Apple at the event were important, the most interesting ones were arguably around the new iPads. The iPad Air 4 has been launched by the company with a design that features a 10.9-inch edge-to-edge retina display, Touch ID, A14 Bionic processor and USB-C connectivity. The chipset promises 40 percent faster CPU, 30 percent faster graphics, and 70 percent faster machine learning with next-generation Neural Engine.5

This is quite interesting as iPad Air 4 features a more powerful processor than the iPad Pro. However, what's more, interesting is the fact that the iPad Air 4 also gets this new ARM processor-based chipset much before the new iPhones which will be launched later this year. As pointed out by Bloomberg's Mark Gurman, this is the first time in about nine years that the iPad has received Apple's newest chip before the iPhone.

Apart from this, the 4th generation iPad Air also only gets a single-lens rear camera. As such, there's a 12-megapixel back camera with Focus Pixels and a 7-megapixel FaceTime HD camera with improved low-light performance. The LiDAR scanner and ultra-wide lens don't make it to the device.

Apart from the iPad Air 4, Apple also launched the 8th generation iPad at the event. The iPad 8 does not get the powerful A14 SoC. However, the iPad 8 comes with slimmer bezels than before and as a result a bigger 10.2-inch display. As it's an entry-level iPad model, there aren't too many surprises here.

The iPad 8th Gen keeps the same design as the 7th generation, a home button with Touch ID built-in. The new iPad 8 is a sure shot upgrade on the 7th generation iPad which features an A10 Fusion chip. Thanks to the efficiency of the A12 Bionic chip, Apple claims the iPad 8 can give up to 10 hours of battery life to keep you going through the day.

The iPad 8 comes with an 8-megapixel back camera and a FaceTime HD camera. The camera, Apple claims can take advantage of machine learning capabilities to enhance your photos. The Apple iPad 8 is powered by iPadOS 14 and also gets support for Apple pencil. iPad 8th Gen is available at a starting price of $329.

In India, the new iPad 8 will be available soon at Apple Authorised Resellers at a starting price of Rs 29,900 for the Wi-Fi model, with the Wi-Fi+ Cellular one being sold at Rs 41,900. This new iPad will come in silver, space grey, and gold finishes in 32GB and 128GB configurations.