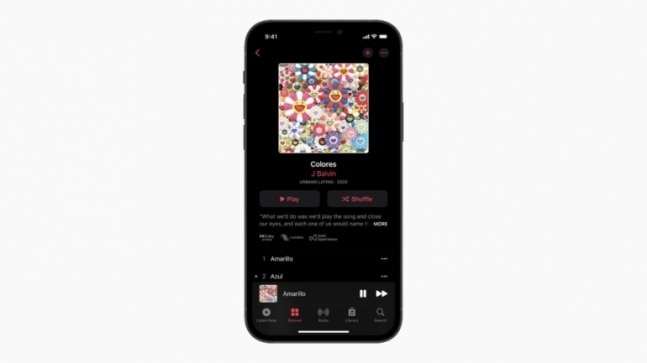 Apple WWDC 2021 will kick off today at 10.30 pm IST with the keynote that will see CEO Tim Cook at the centre-stage. Apple will have a lot on its plate to talk about at this event. The new iOS 15, macOS 12, watchOS, tvOS, and even homeOS will be in the spotlight. And amid all this, there is a possibility, Apple's new Spatial Audio feature for Apple Music may not find as much attention. That is why Apple has announced a Spatial Audio special event slated for after the WWDC keynote.

The Apple Music Spatial Audio event will begin at 12 pm PT Monday, June 7, which is 12.30 am IST Tuesday, June 8. The event will take place right after the keynote of WWDC ends. Apple did not talk about this event much, but it quietly teased the special event in a video on Apple Music, which a Twitter user named Kenny spotted first. Apple is likely to release the Spatial Audio on Apple Music at this event, and it comes days after the iPhone maker announced it alongside the new lossless music quality for Apple Music subscribers. Apple will also talk at length during this event and some artists and music personalities may feature.

The Spatial Audio means support for Dolby Atmos in simple terms. Apple has prepared a huge catalogue of songs, including titles from some of the world's biggest artists and titles from different genres, that will be available in Dolby Atmos. Apple has not confirmed what all genres are going to be available in Dolby Atmos first, but Indian subscribers of Apple Music will likely be looking forward to spatial audio for Bollywood and regional songs. Nonetheless, Apple last month said that it is working with various artists and labels to bring more, both old and new, tracks in Dolby Atmos format alongside the regular version.

You will be able to enjoy Dolby Atmos songs on the hardware that is certified to support that. Apple's new Spatial Audio will be supported on all AirPods and Beats headphones with an H1 or W1 chipset, as well as built-in speakers on the latest models of the iPhone, iPad, and Mac. There is no information on which third-party accessories will support Dolby Atmos on Apple Music right now, but we can expect them to arrive sooner rather than later.

Apple will also talk about the new lossless audio format that is coming to Apple Music. This is essentially the audio quality that is not compressed even a bit and is mostly the studio quality. The lossless streaming on Apple Music will start at CD quality, which is 16-bit at 44.1kHz and goes up to 24-bit 48kHz. It will be supported natively on Apple devices, but there will be a high-tier called the Hi-Res Lossless that will be available at 24-bit at 192kHz and will require an external DAC on your headphones and earphones.

Apple will offer the new Spatial Audio and Hi-Res formats at no extra cost, and we will find out more about the two new features at the upcoming event.