This new MacBook keyboards will be different from the character engravings that keyboards on current MacBook come with. Apple has patented a new kind of keyboard for its MacBook that will have little screens on them, allowing for reconfiguration according to user preference. This concept is similar to how the Touch Bar works on MacBook Pro models where the characters and options change according to the app. However, the keyboard might bring new functionalities, such as dynamic labels for tools and options that will be required for what you are going to do on your MacBook.

The patent filed with the US Patent & Trademark Office (USPTO), spotted by Patently Apple, shows several diagrams on how this keyboard will look and work. The keys will have very tiny organic light-emitting diode screens with pixel arrays. Do not expect these screens to have high resolution or anything because these screens will be aimed at displaying different characters and labels based on what the user has configured. This design will be different from the character engravings that current keyboards on MacBook come with.

Typically, this design will allow Apple to reconfigure what to show on each key and move beyond the permanency that the current keyboard comes with. These dynamic labels might be some specific layout for games, coding, or video editing, totally depending on what the user has opened. Of course, this will need software developers to support the technology, so that the keyboard shows their custom characters or tools on the keyboard screens when their app is launched. 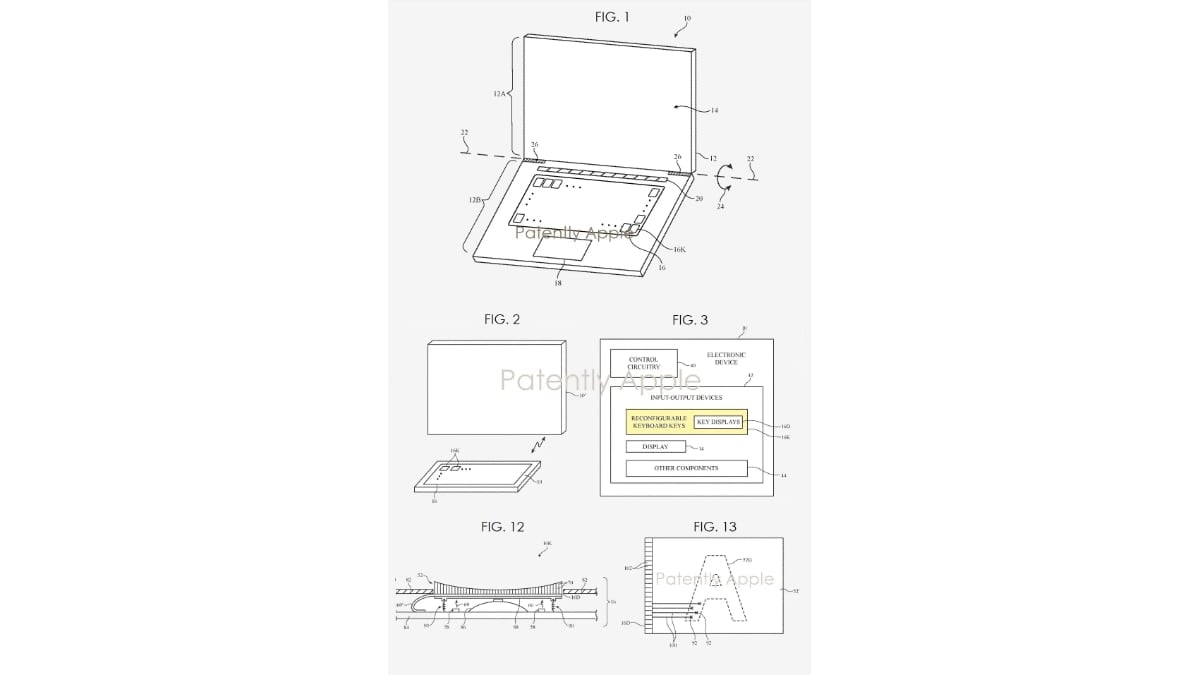 According to the patent illustrations, this new technology could be used for both in-built keyboards on MacBooks and standalone keyboards that ship with Mac desktops, such as iMac, Mac Pro, and Mac mini. The patent also shows that Apple could create a single keyboard with this technology and keep it standard across all of its MacBook, Mac models. But there are chances this might become a problem because Apple sells different sizes for MacBooks and their keyboards differ in size slightly.

The patent is real but it is uncertain whether this keyboard will be too. Registering a patent does not necessarily mean that the technologies or features depicted in them will become real in the future. There are several times companies do not take up the idea and these innovations live only as diagrams in patents. But for what it is worth, it is an impressively innovative idea that Apple has hinted at. And if it becomes successful in pulling it off, other companies will follow the path. Maybe we are looking at what could be the next big thing for MacBooks and PCs.

Apple recently launched the M1 chipset inside the MacBook Air and MacBook Pro models, bringing a significant jump in performance over the Intel-based counterparts. Apple will continue launching M1-powered laptops next year before the second-generation ARM processor comes into existence. But while all this will happen, Apple will gradually make the transition from Intel-powered MacBooks to the MacBooks that run on its own chipset.

New IRCTC e-ticketing app, website launched, here are some of the new features