Apart from the 27-inch iMac, the 21.5-inch iMac and iMac Pro have also been refreshed with new SSD storage options and processors, respectively. 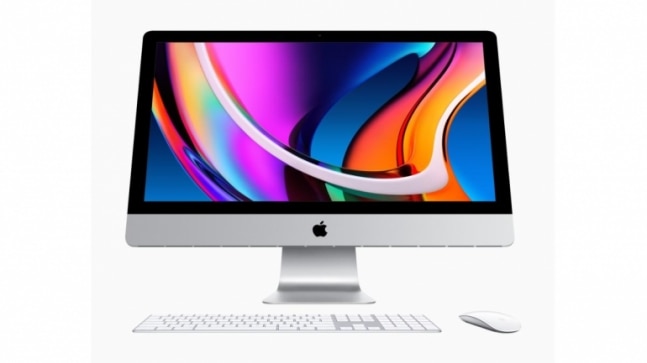 Apple has refreshed the iMac lineup with more powerful and advanced models that are powered by the 10th-generation Intel processors. The popular 27-inch iMac is the one to receive the maximum number of upgrades, including a 1080p FaceTime webcam and a new Nano-texture glass design at the back. The 21.5-inch iMac and iMac Pro are also getting an overhaul with the new models. With this, Apple reaches close to updating its entire computer line-up with the latest Intel processors before its Apple Silicon chipset begins to show up on Macs later this year.

Before we tell you what has changed for the iMac models, here is a rundown of the price of all three models in India.

The sale of all three models will begin later this month via Apple Authorised Resellers, including the online platforms.

The Apple 27-inch iMac now has six- and eight-core 10th-generation processors from Intel but for professionals who need the maximum performance, there is a 10-core processor for the first time in the line-up. Apple is touting a Turbo Boost speeds of up to 5GHz with up to 65 per cent CPU performance on the iMac. There are four CPU SKUs that users can buy, while the two models can also be customised within the 10th-generation processor line-up from Intel.

Apple has also upped the graphic processor on the 27-inch iMac to the AMD Radeon Pro 5000 series that uses the RDNA architecture for better performance with up to 16GB of GDRR6 VRAM. The company claims the new iMac can deliver up to 30 per cent faster booting and rendering times on the Final Cut Pro when compared with the last-generation iMac with AMD Radeon Pro Vega 48 GPU.

For secure boot and additional security features, Apple has included the Apple T2 Security Chip on the 27-inch iMac. The chipset also brings an updated image signal processor on the iMac that brings "tone mapping, exposure control, and face detection for a much higher quality camera experience." The chipset also works with the speakers on the 27-inch iMac to deliver better balance, more bass, and high fidelity. The FaceTime camera has been upped to support 1080p resolutions now and it works with both T2 chip for better results.

The 27-inch iMac has also True Tone technology on its Retina Display now, which is responsible for adjusting colours on the display according to the ambient light. The 27-inch iMac also gets an optional Nano-texture glass coating for $500 extra. It is similar to the one on Apple's Pro Display XDR and reduces screen glares and reflections with extra coating. This will be helpful if you use the iMac in a bright environment where reflections on the screen can be detrimental to your work manner.

The 21.5-inch iMac is also getting upgrades alongside. They now have the entire line-up with the standard SSD storage with a choice for the Fusion Drive is also available for the 256GB SSD storage on the base model without an additional cost. There are no other changes to this iMac model this year so far.

Coming to the iMac Pro, the powerhouse, is getting the 10th-generation Intel Xeon processors with up to 18 cores and graphics performance of up to 22 teraflops. There is up to 256GB quad-channel ECC memory and the same 27-inch Retina Display with 5K resolution.

All of the new iMac models will be eligible to run macOS Big Sur later this year.