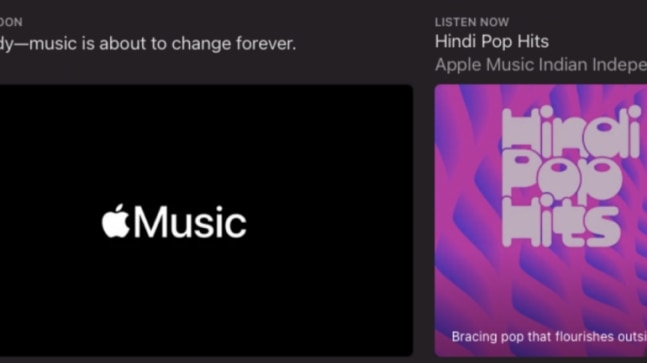 Apple is tipped to be working on the Hi-Fi or high-fidelity Music tier for a while now.

Apple has teased a new feature for the Music app, and it can be the Hi-Fi audio for Apple Music app. The teaser can be seen on the browse page of the Apple Music app and says 'Get ready music is about to change forever.' It doesn't reveal any information about the upcoming feature but, comes at a time when there are a lot of rumours about the Apple Music Hi-Fi service launch.

For the unversed, Apple is planning to launch a new Apple Music+ subscription tier and the third-generation AirPods on May 18. The tech giant is not hosting a launch event for this and is likely to make the announcement via a press release on its website.

Apple is tipped to be working on the Hi-Fi or high-fidelity Music tier for a while now. The new subscription plan will bring CD-quality sound in a lossless compression standard. Interestingly, the new plan is tipped to cost the same $9.99 as the current individual Music plan. The company is yet to make any official statement around the upcoming announcement but, Hi-Fi music tier was spotted on the Apple Music app on iOS 14.6 beta as well as Android beta app.

It is said that Apple Music will offer two choices for lossless playback: 24-bit/48kHz and 24-bit/192kHz.

More and more streaming services are looking to offer lossless audio to their listeners. Earlier this year, Spotify had announced that it will bring the feature to its app later this year. However, it is yet to reserve a date for the same and hasn't announced the pricing of the plan either. The other two platforms that currently offer lossless audio are Tidal and Amazon both charging $15 a month or more for the service.

If Apple manages to offer the same under $10, it will give the Cupertino-based tech giant a huge advantage over competitors. This becomes particularly important because unlike most other apps, Apple Music is available for both iOS and Android users which increases its user base.

Apart from the new music service, Apple is also expected to launch its new truly earbuds on the same date. The Apple Airpods 3 will follow the AirPods Pro from few years ago and are expected to have a similar design. However, they may skip Active Noise Cancellation and are likely to cost as much as the AirPods 2.