An Indore-based man saved himself from a potential cardiac arrest, thanks to the ECG feature on the Apple Watch Series 5. 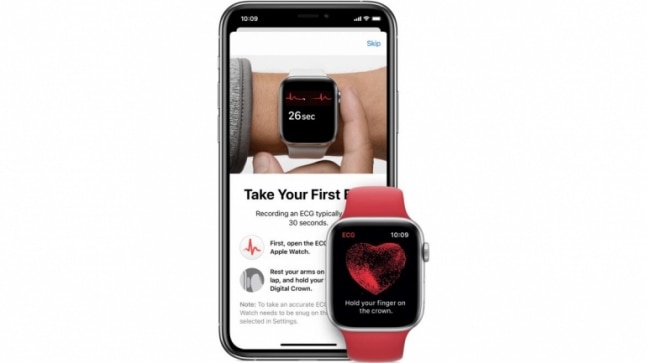 In another incident that highlights how useful the Apple Watch has been, the life of an Indian man was saved by the electrocardiograph (ECG) feature. The ECG on the Apple Watch began alerting an Indore-based man about his irregular heartbeat patterns and helped doctors diagnose the ailment before the condition could have got worse.

According to Hindustan Times, R. Rajhans is a 61-year old man living in Indore. His son Siddharth Rajhans gifted him an Apple Watch Series 5 and he has been using it since early 2020. Siddharth works in Silicon Valley, including his stint at Apple. He has also worked as an iOS and watchOS developer. R. Rajhans, on the other hand, is a retired pharmaceutical professional.

Rajhans is said to be a fit and healthy person, showing no symptoms of any heart-related ailment. Although he suffers from hypertension, which is common for a person his age. Due to the reduction in physical activities during the pandemic-induced lockdown, he could not go out. Nor could he visit his doctor over these months to get himself a check-up. He visited his doctor last in March.

Later in March and April, his Apple Watch began alerting Rajhans about the irregular heartbeat patterns. Besides the regular day hours, these irregular patterns would show up on the Apple Watch records when Rajhans was sleeping. The condition of having irregular heartbeats is called arrhythmia. Sometimes, his resting heart rate would be abnormally high, which is what is the case of tachycardia.

His heart rates were being monitored by the Apple Watch Series 5 and all data would be stored in the Health app. On several occurrences, the family consulted a cardiologist and showed him the health data of Rajhans. The ECG data can be exported into a PDF file, allowing the doctor to understand the health better.

The cardiologist diagnosed R. Rajhans with mitral regurgitation due to valve failure. This condition is one of the main reasons behind cardiac arrests, which was successfully diverted with early diagnosis. Rajhans underwent open-heart surgery on July 9 where the valve was replaced with an artificial bioprosthetic valve. Rajhans is now recovering.

Moved by what the Apple Watch did for his father, Siddharth wrote to Craig Federighi, SVP of software engineering at Apple to thank him. Federighi wrote back and asked him to write to Apple CEO Tim Cook to tell him. Siddharth did write to Cook and Lisa Jackson, Apple's VP for the environment, policy, and social initiatives. Interestingly, Siddharth has previously worked under Jackson during his stint at Apple.

Hi Tim & Lisa, I want to congratulate you on the new iPhone 12 line up and the event. It was really great! It has been a pleasure to have been associated with Apple over the years in various ways and I always cherish meeting Tim at WWDC 2016 in person. I wanted to share that my father, Mr. R. Rajhans underwent an open heart surgery recently. He had a Mitral Regurgitation or Mitral Valve failure that was detected in time, thanks to the ECG feature of the Apple Watch. It would have been next to impossible to do this during the ongoing pandemic and the ECG was instrumental in determining A-Fib and arrhythmia in his case, that led to further diagnosis. So, thank you for all that you do!

To his email, Tim Cook replied in a letter thanking him:

Siddharth, Thank you for sharing this. I am happy to note that your father received medical attention in time and I hope he is feeling better now. Our team will connect with you. Tim".

Siddharth is now aiming to make a contribution to this feature so that it can impact more users. He said, "I am developing an app for the Apple Watch that brings ECG, oximeter and pedometer on the same interface. Federighi has praised this idea, as it brings the power of the treadmill test (TMT) to the Apple watch. I would be doing this free of cost as a goodwill gesture soon."