Apple Marina Bay Sands also has an underwater board room located on the lower level of the store. 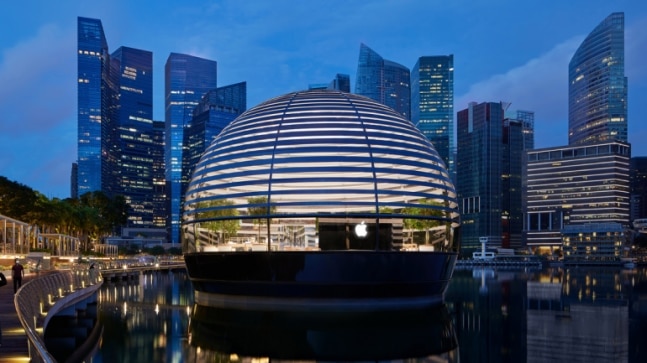 Apple on Thursday opened its first floating retail store, Apple Marina Sands in Singapore. It is the first Apple Store to sit directly on the water and appears as a sphere floating on the Marina Bay. The store is entirely surrounded by water and offers uninterrupted 360-degree panoramic views of the city and its spectacular skyline, according to Apple. The sphere is a first-of-its-kind, all-glass dome structure that is fully self-supported and comprises 114 pieces of glass with only 10 narrow vertical mullions for structural connection.

Apple CEO Tim Cook in a tweet wrote, "Our retail stores bring the best of Apple together and we're so proud to welcome you to our newest home in Singapore, the breathtaking Apple Marina Bay Sands. Enjoy the view!"

Apple Marina Bay Sands also has an underwater board room located on the lower level of the store. The Forum is centered around a Video Wall, which will serve as the stage for 'Today at Apple' sessions featuring Singapore's artists, musicians, and creators. The team at Apple Marina Bay Sands comprises 148 people who collectively speak over 23 languages.

"Visitors entering the store encounter a dramatic reveal into the massive volume of the dome, where they can explore curated Apple products and accessories, receive personal technical support from Geniuses, or simply take in the stunning view of Marina Bay," Apple noted.

Apple noted that the store will implement the same rigorous health measures for both employees and visitors seen across all Apple Store locations, including a mask requirement, temperature checks, and social distancing.

Apple noted that its history in Singapore spans more than 40 years, beginning with the first corporate office in Ang Mo Kio. "In 1981, the team was responsible for producing the majority of printed circuit boards for Apple II computers worldwide. Since then, Apple has expanded its corporate and retail presence, and now supports over 55,000 jobs across the entire Apple ecosystem," Apple noted.