Flipkart Big Billion Days sale is starting October 16, which is why you better save these top smartphone deals right now to get them later. 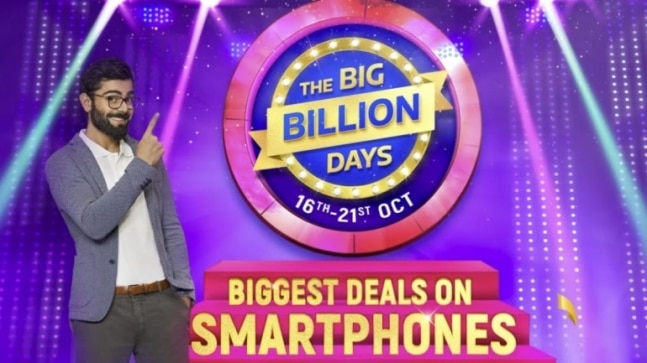 Flipkart Big Billion Days sale is kicking off on October 16 giving you some of the best deals on smartphones that you might not see again this year. While there are still a few more days to go, Flipkart has revealed tech deals that you should check out if you have been waiting to buy a smartphone. These deals are available on smartphones from brands such as Samsung, Xiaomi, Oppo, Realme, and Vivo. Without further ado, let us jump into the extravaganza with top 10 mobile phone deals that you can save for when the Big Billion Days start.

Flipkart will sell the Galaxy Note 10+ for Rs 54,999 under the sale. The phone was launched last year for Rs 79,999 but it saw price drops over the time of one year. Flipkart's deal is still one of the best you can get. To sweeten it further, you will have to pay Rs 38,998 for the Galaxy Note 10+ if you opt for the Smart Upgrade Plan. More details on the Smart Upgrade Plan are here.

Launched earlier this year, the Galaxy S20+ will go on sale for Rs 49,999 on Flipkart. Its listed price is Rs 83,000, which means you are getting it for less than half the price. The Smart Upgrade Plan is also available on this phone, under which you will need to pay 70 per cent of the amount, which is Rs 35,198.

Realme launched the X50 Pro 5G as India's first 5G phone back in February. It was launched for Rs 37,999 for the base variant, but its price was hiked to Rs 39,999 after the new GST rates came in. Flipkart will sell the base variant for Rs 36,999 under the sale, which is effectively Rs 1,000 less from the launch price.

Realme launched the C11 a few months back when it overhauled its C-series. The C11 is one of the trio that runs the same Helio G35 processor. Flipkart will sell this phone for Rs 6,499, which is a limited-time deal. Realme C11 was launched for Rs 7,499, meaning you get a Rs 1,000 discount.

Launched as a budget premium device from Redmi, the K20 Pro will be available for Rs 22,999 under the Big Billion Days sale. It was launched for Rs 27,999 but saw a price hike to Rs 28,999 after changes in GST.

Flipkart will sell the Poco X2 for Rs 16,499 for the base variant. It was launched for Rs 15,999 but saw various price hikes, finally reaching the Rs 17,499 mark. This means that you will get a discount of Rs 1,000 on the phone but technically it is Rs 500 more than the launch price.

The Oppo A52 was launched only a few weeks back in India. Its latest model comes with 4GB of RAM and 128GB of storage and it was launched for Rs 15,999. However, Flipkart will sell it for Rs 12,990 under the sale. This is the first time the smartphone will be available on offer.

Motorola launched the Moto G9 for the price of Rs 11,499 but Flipkart will be selling it for Rs 9,999 under the Big Billion Days sale. The smartphone comes with a 48-megapixel quad-camera setup and Snapdragon 662 processor under the hood.

Google turns farmer with project Mineral, its robots are growing soybeans and strawberries