Caesar Sengupta, one of top Google execs, is leaving the company

Caesar Sengupta, who was leading Google's payments service and working on future products for the Next Billion Users, has announced his exit from the company. Caesar Sengupta, part of Google since 2006, is parting ways with the company to work on a new venture. Announcing his exit, Sengupta wrote on Twitter, "After ~15 wonderful yrs @Google, I'm stepping into the outside world on a new journey. I leave, heart full of gratitude, joy and many deep friendships. @sundarpichai and many many Google friends."

Caesar Sengupta was the main person behind Google Pay success and was also working on new products that would cater to the new internet users. He held the position of General Manager and VP, Payments and Next Billion Users.

In a LinkedIn post, Sengupta has shared the email he sent to colleagues at Google. He wrote, "After ~15 wonderful years at Google, I have decided to venture out and start on a new mission. I remain very positive about Google's future but it's time for me to see if I can ride without training wheels. [....] I leave Google, heart full of gratitude, joy and many many deep friendships. Am uncomfortably excited about the future. Wish me luck!"

During his stay at Google, Sengupta worked on different projects right from ChromeOS to Next Billion Users to Google Pay. Sengupta's mail also confirms that his last day at Google will be April 30, 2021. In his email to colleagues, he claims that the next project or venture isn't decided. 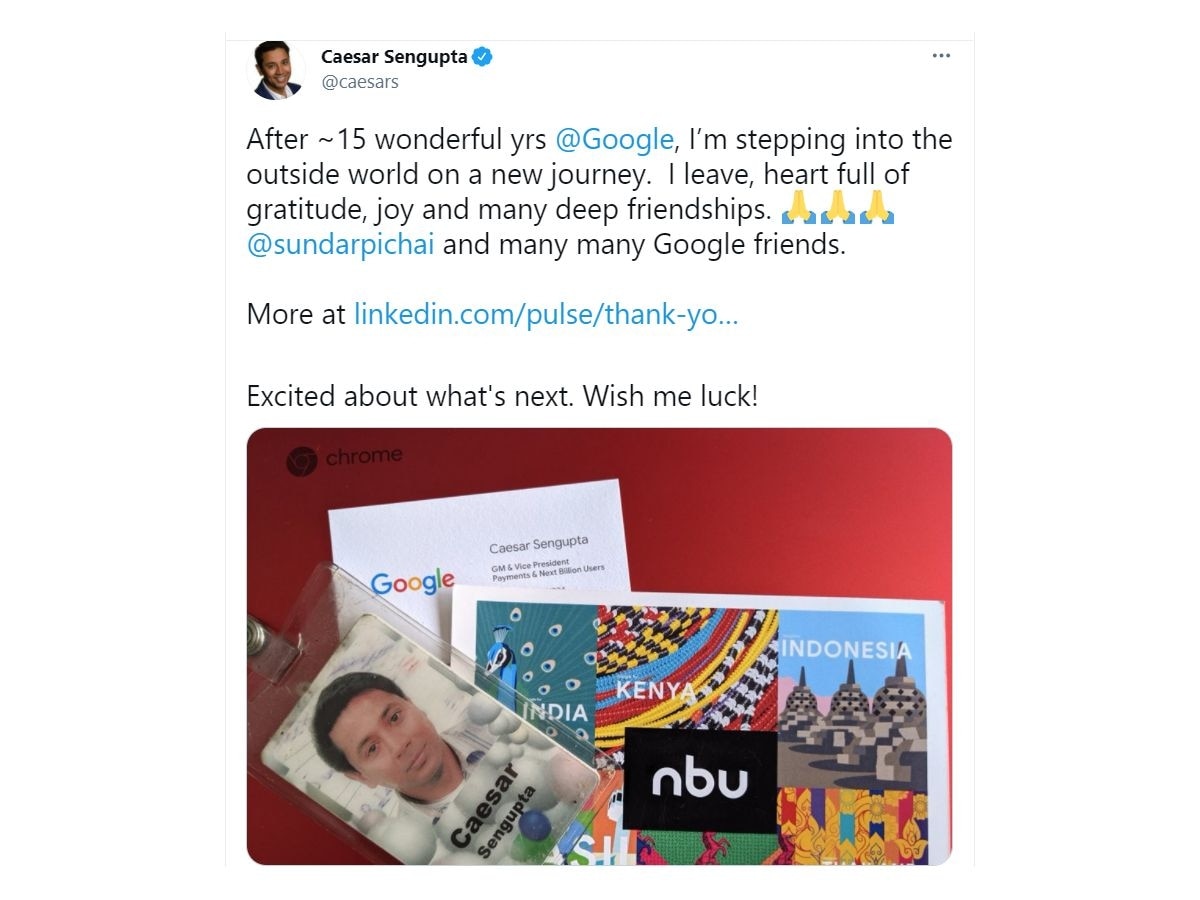 Some excerpts from his mail to colleagues at Google, "Jan 2006. I had just finished solving a linked list problem on the whiteboard during my Google interview when my interviewer asked me about my personal interests. I hesitatingly brought up my love of poetry. The interviewer immediately asked me to recite my favourite poem* and we then spent the next 10 minutes discussing it. At that instant, I knew that a company where two engineers discussed beauty, emotions and poetry during an interview was something special, and I had to sign up. And so I did."

Sengupta has also mentioned how CEO Sundar Pichai helped him during his early days. In his email to colleagues, "As I embark on this next chapter of my life, I am incredibly grateful to this wonderful company and our leadership, especially Sundar, who took a bet on me, a novice PM, a decade and a half back, sponsored me, gave me the opportunity to learn, grow, make mistakes and build deep friendships that I will cherish forever. I am also thankful to my leadership team and all of you for everything you've accomplished, driven by our mission to help unlock economic opportunity and make Google feel like it is built for everyone. I feel like I went to product and team building school at Google, and I don't think I'll ever be able to fully express how grateful I am for that opportunity. The world is going digital at a faster pace than ever before, and with the depth of talent at Google, the best is yet to come."