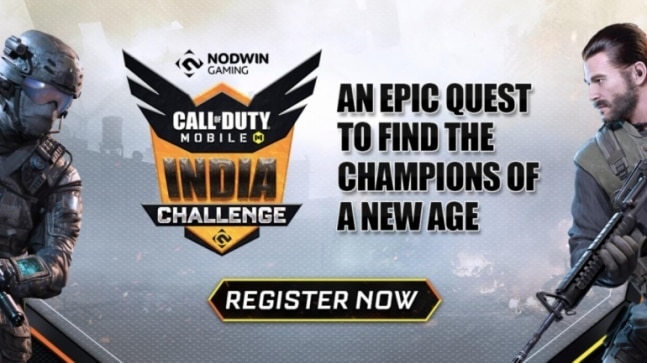 Call of Duty Mobile owner Nodwin Gaming has announced the first-ever esports tournament for India that will feature a prize pool of over Rs 7 lakh. The contest is called Call of Duty Mobile India Challenge 2020, the registrations for which are now open in some categories. The latest esports tournament comes at a time when PUBG Mobile India is set to make a comeback soon and Garena Free Fire has tied up with Qualcomm for another tournament with large prize pools.

The finals for the Qualifier 1 round will be held starting December 4. The 5v5 mode finals will take place on December 4 while the finals for the Battle Royale mode will happen on December 11, according to the company website where the rulebook for this contest is also available for players looking to register themselves for the tournament. These two contests will be played under the Qualifier 1 round but there will be a Qualifier 2 round for both.

"Players and teams can register for both the modes or either of the modes to have a shot at the first-ever CODMIC title," said the website.

Nodwin Gaming is putting up a prize pool of total Rs 7.2 lakh in the tournament. The first prize will be Rs 1,25,000 for the winner of the 5v5 mode, with a total share of Rs 2,35,000 from the total pool. The Battle Royale mode winner will be eligible for the same prize money, however, there will be several prize categories for players in this mode. The total share of Battle Royale mode will be Rs 4,13,000. The image below shows the complete breakup of the prize money among players and the positions they secure in the contest.

Call of Duty Mobile India Challenge will also offer a live stream of current matches being played, including commentary and gameplay from the top players of India. These live streams will be available via the official handle of Nodwin Gaming on both YouTube and Facebook in India.

Commenting on the announcement of Call of Duty Mobile India Challenge, Akshat Rathee, co-founder of Nodwin Gaming said, "Call of Duty Mobile had its takers from day 1 and the number grew at a substantial pace in India. Our mobile-first esports market grew diverse with its arrival. A full-blown CODM tournament was long overdue, we heard the community and it eventually happened. We are glad to have made this move and I'm sure this will be a wonderful platform for the gamers to make a name for themselves."

Surge in esports events in India

With PUBG Mobile gone a few weeks back, other gaming titles saw an opportunity to wrest the market to get popular while filling the void left by the popular battle royale game. Consequently, the companies that own these games began announcing esports events that reward players for their skills in these games, contributing to the popularity of these games in India.

Over the past few months, the gaming realm of India has seen an abrupt shakeup, including the emergence of several new games. Some of these games existed but the ban on PUBG Mobile brought them to the forefront. One such game is Garena Free Fire that uses the same battle royale techniques as the one used in PUBG Mobile. Free Fire became popular in a jiffy and now the game developers are announcing an esports event in partnership with Qualcomm.

BSNL customers can activate Vi roaming network in Delhi and NCR, here is how