Clubhouse now available to select Android users in US

Clubhouse noted that it will continue with the waitlist and invite system, to ensure that each new community member can bring along a few close friends. 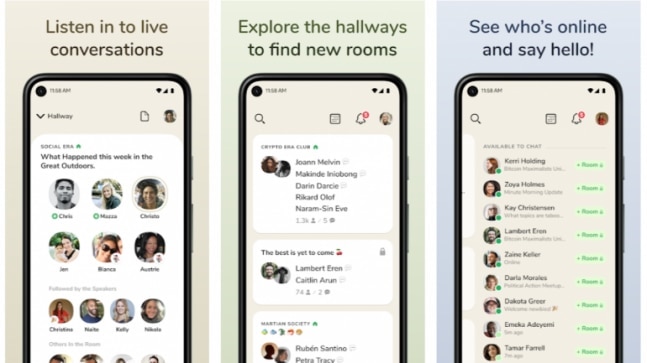 Clubhouse, the invite-only audio app is rolling out to Android users in the US, a year after it was launched for iOS users. Clubhouse noted that the beta would start rolling out in the US followed by other English-speaking countries and eventually the rest of the world. Clubhouse took its pace with the platform and started on a single platform which expanded gradually through an invite model. Clubhouse noted that it will continue with the waitlist and invite system, to ensure that each new community member can bring along a few close friends.

"Our plan over the next few weeks is to collect feedback from the community, fix any issues we see and work to add a few final features like payments and club creation before rolling it out more broadly," the company said in a blog post Sunday. The audio-only platform lets users listen to live conversations with speakers or hosts only letting people with invites in the conversation. Clubhouse was launched in March 2020 and was developed by Davison and Rohan Seth.

While Clubhouse did not release its Android version for over a year after it did for iOS, it has now given its reason for the same. "Earlier this year, Clubhouse started growing very quickly, as people all over the world began inviting their friends faster than we had ever expected. This had its downsides, as the load stressed our systems—causing widespread server outages and notification failures, and surpassing the limits of our early discovery algorithms, the company noted.

Clubhouse installs have taken a hit after the company faced moderation issues. Clubhouse noted that it will expand its language support, and add more accessibility features to iOS app in the coming months. Reports have noted that Clubhouse's beta Android app lacks features like the ability to follow a topic, in-app translations, localisation, ability to create or manage a club, link Twitter and Instagram profiles, payments, as well as the ability to change the profile name or user name.

Other tech companies also started releasing their own versions of audio-only apps. Twitter introduced Spaces, Telegram rolled out voice calls for channels, Discord too launched their respective audio only stage features. Reddit has plans to launch its audio-only platform, Reddit Talk. Facebook is also working on its suite audio products expected to launch in the coming months.

ALSO READ: | OnePlus Watch quick review: Looks bold
ALSO READ: | Clubhouse is finally beta testing its Android app but is it too late
ALSO READ: | WhatsApp will not delete your account even if you don't accept new privacy policy by May 15