The social media giant had claimed that Apple is hampering the small businesses with its new policies but Apple defended itself. 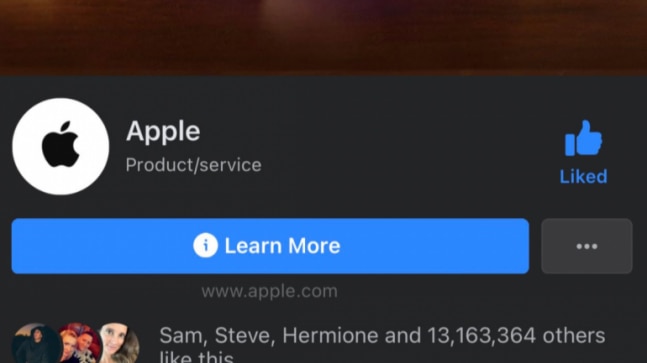 Facebook and Apple are at loggerheads ever since the iPhone-maker had launched new security updates. The social media giant had claimed that Apple is hampering the small businesses with its new policies but Apple defended itself. However, amid the mud-slinging, it was being reported that Facebook has unverified Apple's official page on its platform. Turns out there is very little truth to it.

Social Media consultant Matt Navarra was the first to notice that Facebook has apparently unverified Apple following their public spat. He shared a screenshot of the Apple Facebook page and posted from the official Twitter handle, 'Facebook has removed Apple's blue tick Page verification."

However, after checking with Facebook, Navarra quickly posted the update. He wrote that the official Apple page was never verified in the first place. Facebook told him that other pages belonging to Apple including the Apple Music, Apple Podcast, and Apple TV are all verified. The reason why the main Apple page was never verified is that the admins of the page did not initiate verification.

- Reason why Apple's FB Page is not verified: "The admins of a page need to initiate the verification process"

Facebook has publicly expressed its displeasure over Apple's new policies that would force it to clearly tell users when it is tracking them. While this is good for the users, Facebook has gone on record to say that it would hamper the small businesses. The social media giant had claimed that the new iOS update would "limit businesses' ability to run personalized ads and reach their customers effectively."

However, Apple in its defense said that it does not want companies like Facebook to change their ad targeting practices, it only wants users about the tracking and takes the consent from them.

"We believe that this is a simple matter of standing up for our users. Users should know when their data is being collected and shared across other apps and websites — and they should have the choice to allow that or not. App Tracking Transparency in iOS 14 does not require Facebook to change its approach to tracking users and creating targeted advertising, it simply requires they give users a choice," Apple told the Verge in a statement.

MIUI 12.5 stable update to arrive in February 2021: Here are the new features and eligible devices