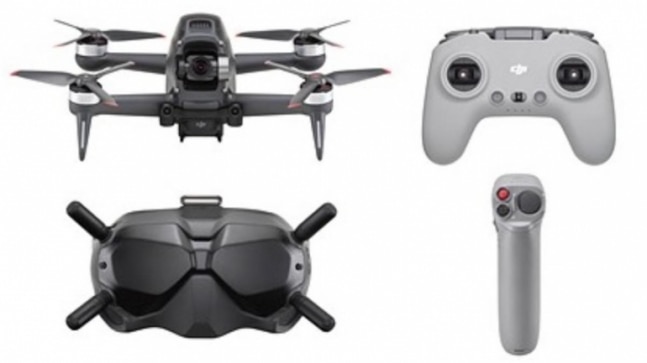 DJI has recently launched a new kind of drone camera. It is the DJI FPV (first-person view) drone that shows the livestream camera feed on a display which users will be wearing. Designed for the drone racing industry, the latest DJI FPV significantly takes drone flying experience a notch above. The users, or pilots, can watch what the drone sees in near real-time.

The Creative Director at DJI Europe, Ferdinand Wolf, declares, "Right out of the box, DJI FPV combines the best available technology for a hybrid drone like no other. It can fly like a racer, hover like a traditional drone, accelerate like a homebuilt project and stop faster than any of them. DJI FPV lets the world experience the absolute thrill of immersive drone flight without being intimidated by the technology or spending hours building a system from scratch."

DJI FPV System consists of the drone, FPV Goggles V2 (head-mount display), FPV Remote Controller 2, and a Motion Controller. All the products are packed with powerful specs and features. For instance, the Motion Controller instructs the drone to move in the direction to sync with the movement of your hand. This is how pilots are able to get that immersive flight experience. The FPV system is equipped with DJI's OcuSync 3.0 technology. It allows for a 10km transmission range, dual-frequencies, and a bitrate of 50 Mbps.

Going into the tech specs, the camera is a 1/2.3-inch 12-megapixel sensor with a 150-degree Field of View and is mounted on a 1-axis gimbal. The camera is able to capture 4K videos at up to 60FPS, 1080p videos at up to 120FPS and more. Pilots can take both stills and videos in the same flight. In order to prevent a shutter rolling effect when the drone flies at high speeds, DJI uses RockSteady electronic image stabilization.

DJI FPV uses the latest version of the DJI Fly app, which now includes detailed tutorials on how to operate DJI FPV. The press release notes, "The newly developed DJI Virtual Flight App is a free simulator app that familiarizes new pilots with drone flying movements in an easy, fun and risk-free environment. The simulator allows pilots to fly the DJI FPV drone in various settings using the dedicated controller." Also, the simulator is currently available on iOS only. The support for android devices will come later in 2021.

As for buying the DJI FPV drone, there are multiple options available. The standard DJI FPV combo which includes the drone, remote controller 2, FPV Goggles V2, and one Intelligent Flight battery comes for $1,299 in the United States. The Fly More Kit includes two additional Intelligent Flight batteries and a dedicated charging hub for $299. The Motion Controller is sold separately for the price of $199. The price and availability of the new DJI FPV first-person view drone in India is not known.

WhatsApp launches voice, video calling feature for web version; here's how to use