Dogecoin price has been on a decline after an initial rise earlier this week. 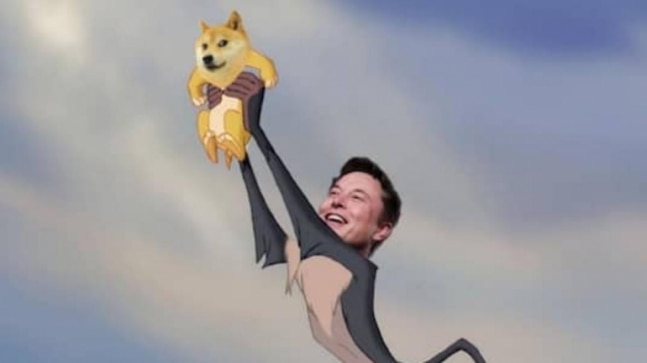 Meme-based cryptocurrency Dogecoin, which has been making headlines for the past week, is on a downslide. The digital currency has crashed over the past two days, reducing by more than 30 per cent in value. The decline started a day after crypto fans celebrated April 20 as the Doge Day, using hashtags on social media platforms to fuel the price of this cryptocurrency. On Monday, Dogecoin's price in rupees had crossed Rs 32 but came down to Rs 23 on Wednesday (at the time of writing).

Dogecoin fans used the hashtags #DogeDay and #DogeDay420 to post memes, messages and videos on social media platforms including Twitter, Reddit and TikTok. "GIMME THAT DOGECOIN LAMBO!!! #DogeDay" one tweeted, referring to the Lamborghini sports car popular in crypto culture.

The crypto had hit a record peak earlier this week when its market capitalization soared to more than $50 billion. After the slump, its market cap dropped roughly $45 billion, according to coinmarketcap.com. Bitcoin remains to be the most popular cryptocurrency with a market cap of more than $1 trillion.

Dogecoin was created by two software engineers Billy Markus and Jackson Palmer as fun and instant cryptocurrency in December 2013. It is a digital currency just like Bitcoin, used for e-transactions. It became popular when Tesla's chief executive officer (CEO) Elon Musk, rapper Snoop Dogg and rock band Kiss' bassist Gene Simmons mentioned it on Twitter. The Dallas Mavericks, owned by business rogue Mark Cuban announced the team would be accepting Dogecoin as payment. Social media platforms like TikTok and Twitter have also helped in rise of Dogecoin.

Dogecoin's logo features a Shiba Inu dog at the center of the meme. In fact, it was started as a joke and was largely an internet meme before it really took off at the start of this year. Dogecoin's rise came during a surge in online trading of stocks and crypto by retail investors, stuck at home with extra cash because of the COVID-19 pandemic.

One of the reasons behind this jump has been platforms like Reddit and Twitter where people started using the term 'To the Moon' with reference to Dogecoin. The term is popularly used for cryptocurrencies when they hit really high prices.

Also Read | What is Dogecoin? All you need to know about this cryptocurrency
Also Read | What are Apple AirTags, how do they work, and other questions answered
Also Read | Amazon website says oxygen concentrator not essential item, puts spotlight on wonky algorithms in Covid times

Airtel XStream, JioFiber, BSNL and Excitel broadband plans under Rs 800 that you can go for