Micro-blogging site Twitter raked up a storm on Wednesday by adding a caveat to US President Donal Trump's tweets about mail-in ballots. Trump now has threatened to close down social media. Micro-blogging site Twitter raked up a storm on Wednesday by adding a caveat to US President Donal Trump's tweets about mail-in ballots. The social media giant added a warning below his tweets claiming that "Mail-in ballots are fraudulent". This however wasn't received well by Trump as he alleged that Twitter is trying to "stifle free speech". Now in a fresh series of tweets, the US President has lashed out at Twitter and also threatened to "close down" social media.

In fact, there are reports that Trump will soon sign an executive order that will allow US agencies to check and investigate social media companies, including Twitter. The order is also likely to say that social media companies don't fall under the category of media and hence cannot take editorial decisions on content. In a way, Twitter fact-checking something in a tweet is an editorial decision.

Lashing out at Twitter, Trump wrote, "Republicans feel that Social Media Platforms totally silence conservatives voices. We will strongly regulate, or close them down before we can ever allow this to happen. We saw what they attempted to do, and failed, in 2016. We can't let a more sophisticated version of that happen again. Just like we can't let large scale Mail-In Ballots take root in our Country. It would be a free for all on cheating, forgery and the theft of Ballots. Whoever cheated the most would win. Likewise, Social Media. Clean up your act, NOW!!!!"

Trump lost his cool after Twitter fact-check his tweets stating that the US presidential elections will be "rigged". Twitter had added a warning below his tweets that read, "Get the facts about mail-in ballots". When clicked on the label, the readers will be taken to a page with links to articles and news reports on Trump's claims about Mail-in ballots. The fact-checkers from CNN, Washington Post, and others have found Trump's claims about mail-in ballots "unsubstantiated."

An enraged Trump also took a jibe at Twitter and wrote, "Twitter has now shown that everything we have been saying about them (and their other compatriots) is correct. Big action to follow!"

Twitter CEO Jack Dorsey responded to Trump's tweet and said that he is accountable for the actions of the company and also requested to keep the employees out of it. He also added that Twitter will continue and "point out incorrect or disputed information about elections globally."

"This does not make us an "arbiter of truth." Our intention is to connect the dots of conflicting statements and show the information in dispute so people can judge for themselves. More transparency from us is critical so folks can clearly see the why behind our actions," Dorsey tweeted. 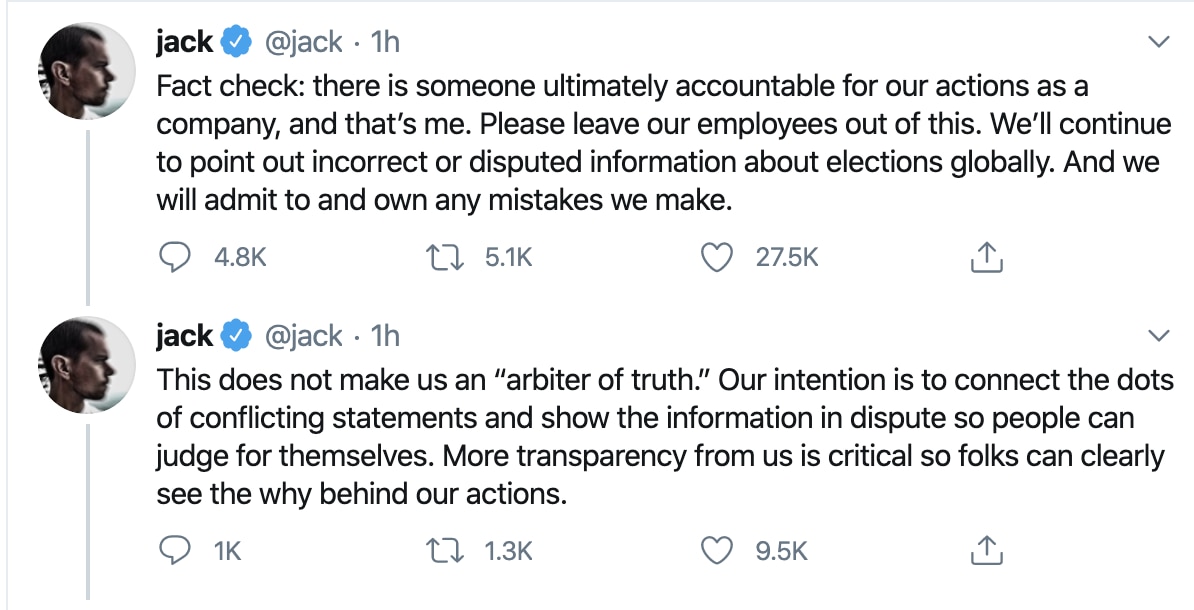 Facebook CEO Mark Zuckerberg also reacted to the Trump-Twitter controversy. In an interview with Fox News, he said Facebook's policies are different from Twitter on this. "I just believe strongly that Facebook shouldn't be the arbiter of truth of everything that people say online. In general, private companies probably shouldn't be especially these platform companies shouldn't be in the position of doing that."

Earlier, this month, Twitter had announced that it will add labels and warnings to tweets that could potentially mislead people. The micro-blogging site had also stated that they will label fake tweets and misleading tweets irrespective of who posts them.

Reliance Jio has doubled the data of JioFiber annual plans: Which one should you choose?