Along with the Echo speakers, Amazon launched a Fire Tv Stick, a flying security camera, ring car alarm, and more. 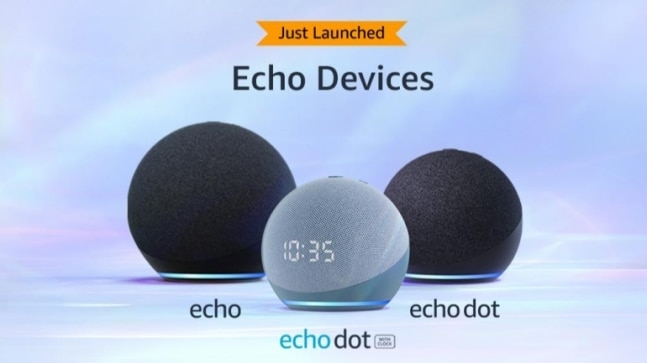 Amazon introduced a new range of Echo products in its launch event on Thursday. The event like any other tech event took place virtually owing to the coronavirus scare. Along with the Echo speakers, Amazon launched a Fire Tv Stick, flying security camera, ring car alarm, and more but out of all the products only the Dot and Fire Stick were released in the Indian market.

Talking about the new Dot, Parag Gupta, Head of Amazon Devices, India said, "Echo devices have played an integral part in simplifying the lives of our customers. With the convenience of voice, they simply ask Alexa for their favorite music, control smart home appliances, or just have a fun time with family. With the new range of Echo devices, we are making it more natural and convenient for customers to interact with Alexa. The new range of Echo speakers are completely redesigned for an improved audio experience and seamlessly merges into the home decor. We are proud to share that these are our most sustainable products yet."

With Echo Dot, Amazon has also announced unveiled a never-seen-before design. The speakers are spherical in shape but its fabric finish and an LED light ring at the base of the sphere give it a real premium feel. The Echo Dot speakers have been launched in three different variants such as the Echo, Echo Dot with clock, and the Echo Dot Kid's edition. Although they all the same, there is a minute difference in the specifications of the three Echo Dot variants.

Echo is the top-end model amongst the other variants, it houses a 3.0-inch woofer, dual-firing tweeters, and Dolby processing that delivers stereo sound with clear highs, dynamic-mids, and deep bass. Echo comes with a built-in Zigbee smart home hub and supports Bluetooth Low Energy (BLE) that helps conserve energy. The company claims that the device is capable of sensing the acoustics of your space and fine-tunes audio playback.

Now coming to the Echo Dot, the speakers look identical to the Echo. Echo dot houses a powerful 1.6-inch, front-firing speaker, that produces crisp vocals and balanced bass and it is powered by Amazon's first-generation AZ1 Neural Edge processor.

Redmi 9 Prime India sale today: Key features, price and everything else you need to know