The narrator in the video explains that this 9-year-old macaque monkey, Pager, had a Neuralink implanted about six weeks before the video was shot. 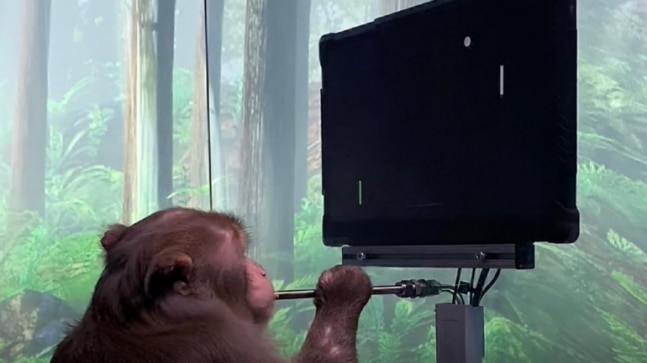 Pager played a game pong with no joystick whatsoever.

Elon Musk's Neuralink, a company that focuses on developing brain-machine interfaces, has posted a YouTube video which shows a monkey navigating an on-screen cursor using only its mind. The monkey can also be seen playing pong with its mind. The narrator in the video explains that this 9-year-old macaque monkey, Pager, had a Neuralink implanted about six weeks before the video was shot.

The incredible video shows Pager playing a video game using a joystick for a banana smoothie reward, delivered through a metal straw. As the monkey plays the game, the Neuralink device recorded some information. This included details about which neurons were firing. Apparently, it allows the device to learn and predict hand movements by recording which regions fired.

One the process was over, the joystick was disconnected from the computer but the monkey continued to play the game using his mind. Yes, Pager played a game pong with no joystick whatsoever.

"We are pleased to reveal the Link's capability to enable a macaque monkey, named Pager, to move a cursor on a computer screen with neural activity using a 1,024 electrode fully-implanted neural recording and data transmission device," Neuralink said in a statement.

The video was also shared by Elon Musk on Twitter.

"Monkey plays Pong with his mind," wrote Elon Musk while sharing the link to the YouTube video on Twitter. "A monkey is literally playing a video game telepathically using a brain chip!!" he added.

Similar techniques have been used in the past to help physically challenged people which makes it believable that a monkey might be able to play video games using a brain implant. Yet, it is a significant achievement for Neuralink.

In 2019, Musk had claimed that a Neuralink implant had enabled a monkey to control a computer using its brain. Since then, the technology has been shown on different occasions. Musk also tweeted that Neuralink might let a paralysed person tweet faster than a person using their thumbs on a smartphone.

A later goal, he said in a follow-up tweet, will be to send signals from Neuralinks in the brain to Neuralinks in major body neural clusters, "thus enabling, for example, paraplegics to walk again."