Facebook to start cracking down on groups for breaking its rules

The social media giant has said that it would limit the reach of groups that contain potentially harmful content. 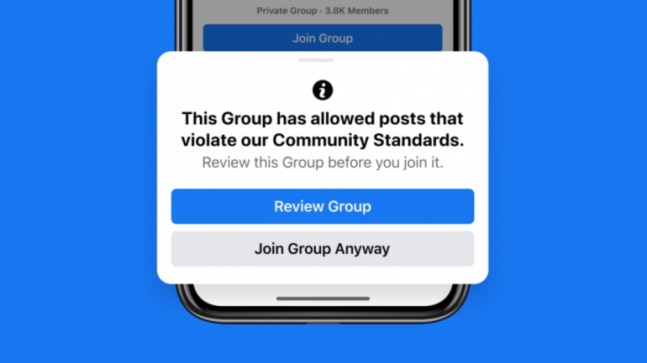 Facebook has now announced a new set of rules for its groups to keep harmful content at bay. The social media giant has said that it would limit the reach of groups that contain potentially harmful content. Facebook will take the groups down if it reportedly breaks the rules set by the platform. The company will also take action against the group members who repeatedly break rules on its platform.

Facebook also said in a blog post that it would stop recommending potentially harmful groups to people. The company also said that the groups and members that violate the rules will also have a limited reach on the platform.

"We know we have a greater responsibility when we are amplifying or recommending content. As we work to make sure that potentially harmful groups aren't recommended to people, we try to be careful not to penalize high-quality groups on similar topics. The tension we navigate isn't between our business interests and removing low-quality groups — it's about taking action on potentially harmful groups while still ensuring that community leaders can grow their groups that follow the rules and bring people value. We try to balance this carefully in our recommendations guidelines," Tom Alison, VP of Engineering, Facebook said in a blog.

Facebook in a statement had said that it will stop people with repeat violations from posting in any group for a limited period of time. The time period could be between 7 to 30 days and they will not be able to add new members to the group or make new groups on Facebook.

The social media giant said that it will also let people know when they are about to join a group that has Community Standards violations. So they can change decide whether they want to join the group or not. "We'll limit invite notifications for these groups, so people are less likely to join. For existing members, we'll reduce the distribution of that group's content so that it's shown lower in News Feed. We think these measures as a whole, along with demoting groups in recommendations, will make it harder to discover and engage with groups that break our rules," the blog read.

If a group has a substantial number of members who are repeated offenders, Facebook will ask admins and moderators to temporarily approve all posts. The content from the group will not be shown to a wider audience until an admin or moderator reviews and approves it. However, if the group admin continues approving objections content the entire group down.