Facebook will ask users to read before sharing articles but will this stop spread of fake news? 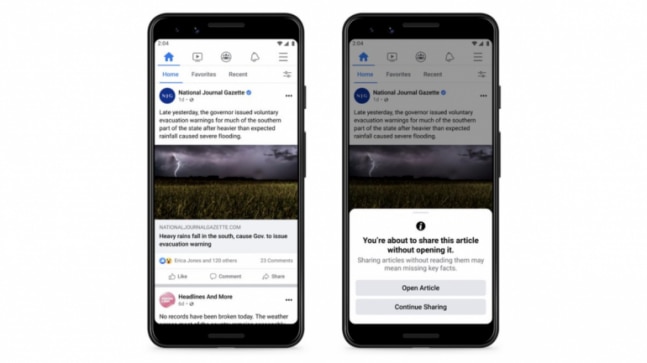 Facebook is testing one of the features that was rolled out by Twitter a couple of months ago. Just like Twitter, Facebook will also start reminding users to read an article before sharing it. This is yet another attempt by Facebook to curb the spread of fake news on its platform. The feature has been tried and tested by Twitter before but has not borne fruitful results. Facebook will initially pick a handful of users across the globe to test the feature.

Announcing the move, Facebook posted from its Twitter account, "Starting today, we're testing a way to promote more informed sharing of news articles. If you go to share a news article link you haven't opened, we'll show a prompt encouraging you to open it and read it, before sharing it with others."

Some social media researchers have claimed that repeated prompts would indeed slow down the curb of misinformation. If people are alerted about something, they would most probably open the story and read it. But the fact remains that only 10 percent of users would do so, the rest will simply ignore the pop-up and share the article as planned. And even if some people open the article to read there is no guarantee that they will read the entire 500-word articles and there is nothing Facebook can really do about it.

When you click on the share button just by reading the headline of something, you will get a notification from Facebook saying, "You're about to share this article without opening it. Sharing articles without reading them may mean missing key facts." Right below the message, there will be two options- Open Article and Continue Sharing. It is pretty easy for users to simply ignore the prompt and share the article without reading because of the second option. It might seem a bit intrusive, but Facebook should not have given the option of "Continue sharing" because the majority of users would choose that. People have a very short attention span and this might not work with users at all.

While this method would not entirely stop the spread of fake news, this might at least encourage people to read more. Twitter already has the feature and claimed in a report that because of the feature, 40 percent more users open articles and read it. Hope this works with Facebook too.

Realme C20A with 5000mAh reverse-charging battery launched at around Rs 7,800