The information was revealed by Tae-moon Roh, the president and head of the company's mobile communications business. 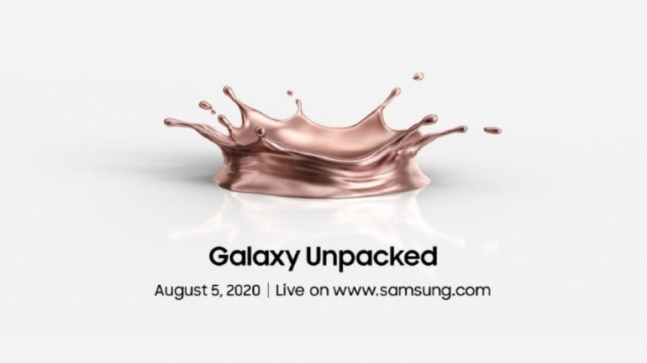 We're slowly getting close to Samsung's second Galaxy Unpacked event for 2020. The event is scheduled to take place on August 5, and ahead of it, Samsung has officially announced that it will be launching five devices on the date. The information was revealed by Tae-moon Roh, the president and head of the company's mobile communications business, who shared this information via a blog post published by Samsung on Monday.

"At this summer's Galaxy Unpacked, we'll be introducing five new power devices ... you will be empowered to live life to the fullest with these devices in your hand (and in your ears, and on your wrist)," he said in the post.

While he did not confirm any confirm what the new products will be, there have been a number of leaks in the recent past which suggest that they could include the Galaxy Note 20, and Galaxy Note Ultra phones being launched alongside the all-new Galaxy Fold 2, a new Galaxy smartwatch and Galaxy Buds.

Apart from this, Roh also talks about the three priorities for Samsung. He explained that going forward, the company's mobile division will focus on first, on what he says are "meaningful innovations." According to Roh, Samsung has invested significantly in research and development over the past six months, and now he claims these investments will lead to "even bolder innovation."

"We'll make mobile technology that's more personal, intelligent, useful, and secure... From foldable to 5G, we have a tremendous amount in the pipeline, with some ready to be shown just around the corner," he added.

He also revealed that the company is looking to strengthen its partnerships that are critical to the company's future strategy. Of which, partnerships with Google, Spotify and Microsoft could be at the top of the list. And last, but not least, he also said that Samsung's Mobile Division also plans to be more flexible in its approach to tackling the ongoing pandemic.

"The pandemic posed a stiff test... It meant transforming quickly to take care of our local communities, partners, and employees, while still building resilience for future operations," he said.

It is interesting to note that Samsung had appointed Roh as its new mobile chief, only earlier this year. He had taken over from DJ Koh. Roh has been with Samsung since 1997 and has been one of the major names in Samsung's R&D unit.