Google all set to launch Nearby Share feature for Android users: All you need to know 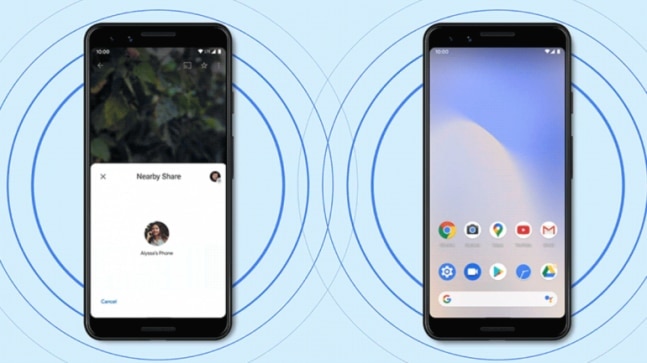 Google's much-anticipated AirDrop-like feature is expected to arrive soon. The company has said that it will launch its very own file sharing feature over the next few weeks. The Nearby Share feature lets users share files, pictures, videos and link directly between any Android devices running Android 6 and newer. The feature has been made available to some of the Pixel devices and Samsung too but the company will now roll it out for a wider audience.

Google's Nearby Share feature is pretty similar to Apple's AirDrop feature. The AirDrop feature lets iPhone users share heavy files, images, videos and much more simply by tapping on the AirDrop button. It allows seamless file sharing between Apple devices once they are paired. In AirDrop, you can choose your visibility to prevent any unwanted user to send files to your phone. Similarly in Android's nearby feature, you need to switch the Nearby Share button on and then wait for the nearby devices to appear in your zone.

For security, the Nearby Share feature lets you choose your visibility. The users will be given three visibility options including "all", "some" and "hidden". If you choose "all" option, you will be visible to all contacts and users in your area if you switch the Nearby Feature on. However, if you select "some" you will only be visible to select contacts and if you choose "stay hidden" you will not appear in any Android users' nearby share. You will get the option of accepting or declining requests when someone tries to send you a file on using the Nearby feature. To use this feature, you wouldn't require any internet connection. You and the receiver should have the Nearby Share feature on your devices to send or receive files.

Just like the AirDrop lets Apple iPhone users share files with MacBooks, Android's Nearby Share feature would enable sharing between Android phones and Chromebooks in the coming months. Now that Google is slowly rolling out the feature for some of the Android users, it would take a little while to make the sharing possible between the Android phones and Chromebooks but it will surely happen in the coming months. Talking about the same, a Google spokesperson had told The Verge that it has "plan[s] to try to expand the feature to additional platforms in the future."

However, one needs to remember that the Nearby Share feature will work only between Android devices so don't try to send files to an iPhone using the feature.

Samsung Unpacked 2020: How to watch and what to expect from Galaxy Note 20, Galaxy Z Fold 2 launch today

Reliance Jio prepaid plans with 28 days validity: All you need to know