Google Duo Web is all set to take on Zoom and Microsoft Team as the app will now allow users to add more than 30 people in a video call. 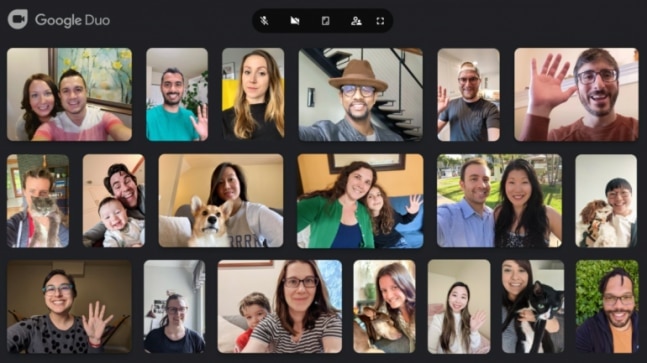 Google Duo Web is all set to take on Zoom and Microsoft Team as the app will now allow users to add more than 30 people in a video call. The company on Tuesday announced that Google Duo Web support up to 32 people in a video call. Earlier, Google had announced that the video-calling app will get the group call support on the Web. The new update will be available in the latest version of Google Chrome.

As per a tweet shared by Senior Director of Product and Design, Sanaz Ahari Lemelson, Google Duo will now function like any other video conferencing app with the ability to add around 32 people in a single video call. Lemelson also shared the screenshot of how the function is going to appear when its launched and you can easily spot around 19 people on one screen. The new feature will be rolled out in the updated Chrome version 83.0.4103.106.

"Today one of our most requested features for Duo, a group calling on the web with up to 32 people, is starting to roll out on the latest version of Chrome," Lemelson wrote in a series of tweets. She also shared the way of starting a call on Google Duo.

To start a video call with many people at a time, users are advised to visit duo.google.com. Once you log in or if you are already logged in, you will see the list of your contacts on Google Duo along with a Create Group button. When you click on it, you will see an Add People button, after adding some people initially you can also create a shareable link which you can further share to add more people on the call.

If you are using an outdated version of Chrome, you will be greeted with a pop-up message that reads, "Use the latest version of Google Chrome to enable group calls. More browsers will be supported in the future."

The group calling feature was earlier made available to the Google Duo app which allows users to add up to 12 people at a time including the host. Google Duo is extremely simple and user-friendly. The new updates in the app can easily take on Zoom, Microsoft Teams, and other emerging video calling apps. A couple of new modes have also been added to Duo including the family mode, new effects, and better ways to connect with people.

Realme an Indian startup, its smartphones made in India: CEO Madhav Sheth