Google experiments with touch-sensitive fabric cords that will help control music, other media

Google is working on a prototype of a smart cord of sorts which help users control their music, other media by tapping, twisting and pressing on cords. 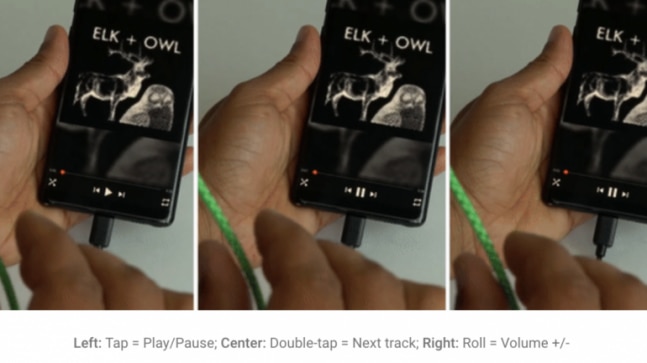 Google is experimenting with a prototype for touch sensitive e-textile cord to control music and other media. The prototype of the fabric cord has been made with what Google calls Helical Sensing Matrix (HSM) which helps the user control music by simply using his fingers.

Since these cords are touch sensitive, instructions can be given depending upon the discretion of the user. The user can either single tap, double tap, twist or apply pressure on the cord.

Google stated that it focused on e-fabric cords as they come in handy for various purposes like drawstrings in hoodies or pull overs. They are also used as wired connections for data and power across consumer devices.

This HSM comes in braided form of insulated e-fabric or yarns which are designed to transmit and receive messages which enable mutual capacitive sensing.

The capacitive coupling at their intersections is modulated by the user's fingers, and these interactions can be sensed anywhere on the cord since the braided pattern repeats along the length, Google noted.

The cord has fiber optics functioning and will give feedback in form of light or sound.

"We want to help the user discover functionality and get continuous feedback on their actions. Where possible, we provide visual, tactile, and audio feedback integrated in the device. Based on these principles, we leverage our e-textile architecture to enable interaction techniques based on our ability to sense proximity, area, contact time, roll and pressure," Google noted.

The pattern of a braid is repetitive which will help users give instructions anywhere through the length of the braid.

"By exploiting techniques from textile braiding, we integrate both gesture sensing and visual feedback along the surface through a repeating matrix topology," Google noted

According to Google, the software is able to distinguish between the different gestures including tapping, squeezing and twisting the cord with up to 94 per cent accuracy.

This is not the first time Google has worked with e-fabrics. In March it teamed up with Adidas to unveil a smart shoe insole. The shoe insole that connects to your phone and can turn your kicks and movement on the soccer field into rewards, The Verge noted.

Google also worked on a denim jacket made in partnership with Levi's. The jacket lets people control their music or get traffic updates by swiping on the sleeve cuff.

The wearable technology was also available on a Yves Saint Laurent backpack.

Realme Watch design and features teased ahead of launch