Google has started migrating Hangouts conversations, along with contacts and saved history. 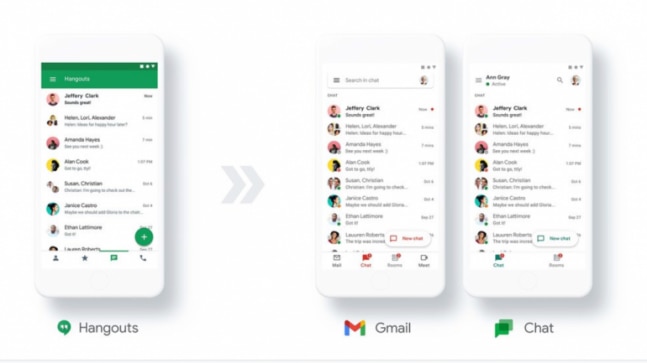 Google has started migrating Hangouts conversations, along with contacts and saved history. The search giant announced on Monday that it will start rolling a slew of updates from December 3. The updates will be around group conversations on Hangouts. The latest update says that the group chats in Hangouts will now appear on Google Chats.

"Starting in the first half of 2021, everyone can begin upgrading from Hangouts to Chat. To ensure a smooth transition, we will help automatically migrate your Hangouts conversations and saved history. These changes further ensure compatibility between classic Hangouts and Chat to make migrating your users as seamless as possible," Google workspace said in the blog.

Meanwhile, Google Chat has also received a host of new features. In group chats, users can add new members and all members will see a message announcing the arrival of the new number. The new member will have access to the previous conversations, primarily the messages that were exchanged before they entered the group. This will help the user in getting familiar with the whole thing. These features will be rolling out form December 3.

Google also announced that it is making changes to its Vault retention policies. "Note that these updated group conversations will also respect a different retention policy in Vault. If you set custom Chat retention rules in Google Vault, the scope of coverage will change. Rules set for "All Chat Spaces" (previously known as "All Rooms") will apply to existing chat rooms, plus updated group messages and group messages that synchronize between Chat and Hangouts. Visit the Help Center for more details," the company said in a blog.

Google will be rolling out the new features to Hangouts and Chats in the coming weeks.