Google Lens has introduced a new feature that would allow users to copy handwritten texts from phone to computer. Google is rolling out the new feature today for its Android and iOS users 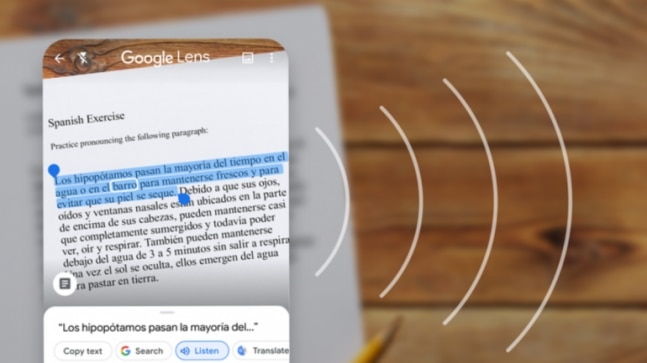 Google Lens has introduced a new feature that would allow users to copy handwritten texts from phone to computer. Google is rolling out the new feature today for its Android and iOS users. But there is a catch if you have bad writing you might never get to use the feature as it only works if the handwriting is neat and readable.

To avail the feature, you should have the updated Google Lens app or the Google App on iOS, where the Google Lens is available on the search bar. Android users can also use Google Chrome to access Lens. You should be logged to your Google accounts on all the devices. For instance, if you are connecting your phone to the computer, to transfer the handwritten notes, both your phone and computer should have you logged in.

Here is how you can copy handwritten texts to computer

— For instance, if you have a few notes written on a piece of paper, just open Google Lens and point the camera at your handwritten text.

—When the camera detects the text, highlight in on your phone screen and select the option "copy to computer" to paste it on another signed-in device with Chrome.

—This is the easiest way to copy something from your phone to a laptop without having to type the entire thing.

This could be a really useful tool for college students as it is the easiest way for them to convert their handwritten notes into well-informed pieces using the Google Lens. For working professionals, who take notes during meetings can also use this tool to send the minutes of the meetings without having to type the entire thing again. However, having neat and readable handwriting is very important for people who want to use this tool. If your handwriting is bad, even Google will not be able to copy your stuff without typos.

Apart from the text to computer feature, Google Lens got another feature that would allow users to learn new words and how to pronounce them. You can highlight the words that are difficult to pronounce using the Lens and tap the Listen button to hear the pronunciation. Google Lens has Spanish, Chinese, and more than 100 other languages in store.