Google notes that the new tools will help users experience an immersive, secure, and people-first approach to meetings. The new features are rolling out for web users. 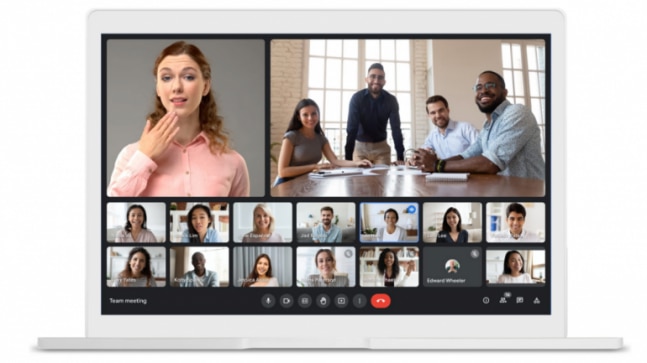 Google is rolling out an updated user interface (UI) for web users with new features for enhanced remote meetings. Google notes that the new tools will help users experience an immersive, secure, and people-first approach to meetings. Owing to the pandemic, people across the globe have adopted a hybrid work culture that requires users to connect from remote and in-person locations for virtual meetings.

"Beginning next month, desktop and laptop users will see a new, richer user interface with an array of easy-to-access features that make meetings more productive and inclusive," Google noted in a blog post.

Visibility: Starting with a user's experience, Google changes how they view themselves in meetings to reduce the meeting fatigue. You can either choose your video to be viewed as a tile, a grid, or a floating picture. This can be resized or repositioned. Users can also minimize their feed and hide it from their own feed entirely. Google will also enable users to turn off their feed across all Google Meet calls.

Multiple Pinning: Google will also allow pinning multiple users if they are presenting during meetings. It will also allow users to pin multiple video feeds in the coming months to let users combine people and content. When unpinned, the presentation tile will become the same size as other participant tiles. This will allow users to see more people on the call and better gauge reactions.

Improved controls: With the new UI, Google is also bringing all its controls in one place, it will make the bottom bar always visible so users will never have to miss out on captions or guess if they are on mute. Further, Google is moving the call button away from the camera or microphone to prevent accidental hang-ups.

Light adjustment: Google Meet will automatically detect when a user appears underexposed and enhances the brightness to improve their visibility. The AI will make a user more visible if the environment is too dark or too light.
Video background replacement: Until now Google Meet enabled users to blur their backgrounds or add custom backgrounds to their feeds. Now, it is adding videos to replace backgrounds that will help users maintain privacy. There will be three themes including a classroom, a party, and a forest, with more features rolling out in the future.

Autozoom: This is another AI feature that will help zoom in and position you squarely in front of your camera, and will help others see you more clearly. Google notes that when a user moves, Autozoom will readjust the focus of the speaker. This feature will be available to paid users. Google Meet is also launching a Data Saver this month that will limit data usage on mobile networks to allow users to save on data costs, especially in Brazil, Mexico, and Indonesia, where data costs can be high.