Google Pixel 4a leaked images show off punch-hole display, fingerprint sensor at back

The Google Pixel 4a has leaked in several images that are said to have been shared in a private Facebook group. 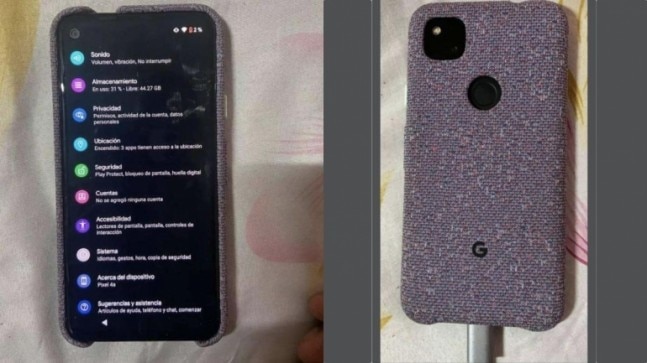 Google Pixel 4's watered-down version, the Pixel 4a has been in the rumour mill for quite some time. Some early rumours had said Pixel 4a would launch at Google I/O this year, but that stands cancelled now due to the unavoidable coronavirus situation. While the launch details of the Pixel 4a are still largely unknown, some live images of the Pixel 4a have allegedly been shared in a private Facebook group, giving us a hint at what the smartphone will look like. By the looks of it, the Google Pixel 4a could come with a punch-hole setup and a camera bump like the one on the Pixel 4 phones. Some Pixel 4a retail box images have also been leaked, alluding to a sooner-than-later launch timeline.

The real-world images of Pixel 4a, which are reasonably pixelated and low-resolution, have been tweeted by a Twitter user who goes by @techdroider. The tweet cites another user named @raude2210 that claims he managed to obtain the images from a private Facebook group. Similarly, some other photos of what is claimed is a Pixel 4a have been posted on Reddit by a user named mseven97. Chances are these two users could be the same but with different aliases on both platforms. The Pixel 4a images shared on Reddit and Twitter look legit and match what was leaked previously but there is no way we can confirm their authenticity.

The Google Pixel 4a has curved edges with thin bezels on it if we go by the leaked photos. There is a punch-hole design on the display with a single front-facing camera. The back has a squarish camera bump with a single camera and an LED flash, positioned diagonally inside the module. At the centre of the smartphone is a circular fingerprint sensor, leading us to believe that Google might skip face unlock on the Pixel 4a. The photos also show the turned-on display on the Pixel 4a, spilling the beans on the interface of the Pixel 4a.

Of course, there is stock Android on the smartphone, along with the standard Google apps. There are also some apps installed on the phone that could aid in testing software and discovering bugs in it. The Settings page of the Pixel 4a (translated from Spanish) shows the available storage is 44.27GB while 31 per cent is occupied. This calculates to around 58GB total available memory on the device -- meaning a 64GB variant. One of the images also shows the grey-coloured fabric case for Pixel 4a.

Besides, @techroider also claims to have shared what looks like an image of the retail packaging for the Google Pixel 4a. The retail box is similar to the ones Google has used for previous Pixel phones, and shows the Just Black colour variant. The Pixel 4a sketch on the retail box also shows a squarish camera module with one camera and one LED flash at the back. None of the images has hinted at what internals the Pixel 4a will pack.

Google could choose to launch the Pixel 4a sometime before the launch of Pixel 5 this year. But nothing is certain at this point, given the disruption coronavirus pandemic is causing across industries. Pixel 4a could have been scheduled to debut at the I/O conference this year sometime in May but Google cancelled it, keeping in mind the on-ground situations right now.

OnePlus 8 launch on April 14: New products to be launched; check out colour, features, other details