Former British PM Winston Churchill's photo was removed from Google Search. Google acknowledged saying it was a bug and has resolved the issue. 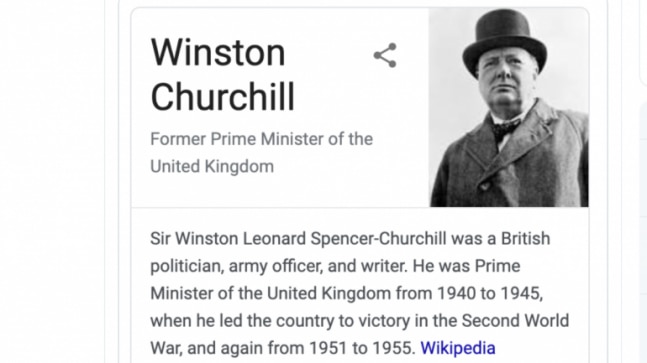 Google has now resolved the mystery of the disappearing Churchill picture from its Knowledge Graph. Google attributed the cause to a bug and addressed the concern saying it was not purposeful.

"We've now resolved the issue that was preventing the picture of Sir Winston Churchill from being updated to appear in his knowledge panel and Knowledge Graph-related lists. Again, this was not purposeful. Our apologies for the concerns caused," Google said in a statement.

We've now resolved the issue that was preventing the picture of Sir Winston Churchill from being updated to appear in his knowledge panel and Knowledge Graph-related lists. Again, this was not purposeful. Our apologies for the concerns caused. pic.twitter.com/qoH2tEWhhq

Google cleared the air and tweeted from its Search Liaison page, "We're aware an image for Sir Winston Churchill is missing from his Knowledge Graph entry on Google. We apologise for any concern. This was not purposeful & will be resolved. Images in such panels are automatically created & updated. During an update, they can briefly disappear."

"If a Knowledge Graph image is missing due to an update, the subject will be named but lack an image in anything automatically generated from the Knowledge Graph. This is why Churchill's image (but not his name) is missing from some lists. It is temporary & will be resolved," Google further said.

Google further addressed the issue of first terms from the names of prime ministers disappearing.

"Some have noted that Churchill's first term does not appear for a search on UK prime ministers that shows an automatically generated Knowledge Graph list. This is not specific to Churchill; a similar thing happens with Wilson, MacDonald and Baldwin. We're exploring why the first terms for Churchill, Wilson, MacDonald & Baldwin are not shown. It might be that our systems are only displaying the last term of prime ministers who had non-consecutive terms. We'll seek to address this to avoid any unintentional concern," Google said.

"Normally, the image would update quickly. In this case, a bug in our systems prevented a new representative image from updating. As a result, Churchill's entry lacked an image from late April until this weekend, when the issue was brought to our attention & resolved soon after," Google added.

The timing for Churchill's picture to disappear was not short of creating a storm on social media, especially in the backdrop of the protests in the USA.

As part of the Black Lives Matter movement, demonstrators and protestors are removing the statues of leaders who they deem tyrants and racist. Last weekend, protestors defaced Churchill's statue in London with the word racist.

A statue of slave trader Edward Colston was also removed and thrown into the Bristol river as part of the demonstrations.