Google says dark mode on Gmail fully rolling out for iPhone, iPad users: Here's how to enable it

In September 2019, Google had rolled out dark themed Gmail. Google has updated its blog saying the dark theme is now fully rolled out for mobile. 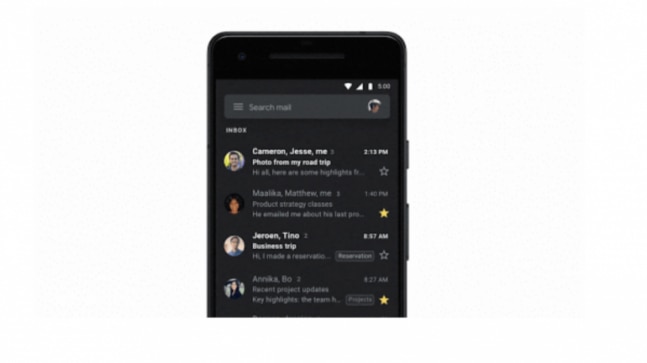 Google has officially rolled out dark mode Gmail for iOs and Android users. An announcement was made regarding the same by Google in September, last year. Google has only made the look official now, a report by 9to5 Google stated.

The report also cited Apps Store Preview which states that in the updated (version 6.0.200519), "You can now switch between dark or light theme after upgrading to iOS 13. Or you can use the system theme set by default." This was first reported by Firstpost.

When Google announced the dark-mode, many iOS users faced problems with the update. While some could not access it, for others, it would disappear after a restart.

"Gmail's dark theme is most apparent — and appreciated — in your inbox, with Google adopting a dark shade of gray rather than true black. The full-width search field up top is a lighter gray, while the navigation drawer is similarly tinted," Google had noted with the announcement.

It had further stated that the sender, subject line, and time in this view will be in white text, while the message body preview is gray. Google noted that the fainter colour will be highlighted for the read emails.

Similar settings were tweaked for Android 10 where users can simply go to Settings followed by themes to enable dark mode.

To enable the dark theme on Android 10, go to your Gmail app on the phone, tap on the hamburger menu at the top left and tap on Settings> General settings> Theme> Dark.

On Pixel, when Battery Saver is enabled, Gmail will default to dark theme automatically. Or, you can go to Gmail Settings > Theme and select Dark.

The report noted that the Gmail dark theme mode has officially been rolled out as the server-side update and could take 15 days to update.

Last month, Google came up with a feature that lets users customise their inbox. The new feature will let users select a layout, look, and feel for their inbox as per their choice.

Users simply have to click on Settings and choose from interfaces, inbox types, and display options alongside at the extreme right of their inbox.

"Note that this update just adds an easier way to access settings that already exist in the full Gmail settings menu. There are no new settings, and users' existing settings won't be changed with this update. You can still see the full settings menu by clicking the "See all settings" button at the top of the new quick settings menu," the blog said.