Google aims to give more controls to users by rolling out controls for smart features by saving data. used to process these tools. Smart features in Gmail include Smart Compose and Smart Reply that were designed for the convenience of users. 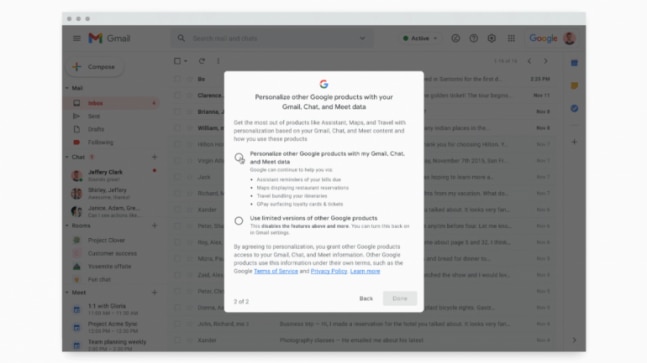 Google is going to roll out new settings and controls for smart features on Gmail that will save background data used by these features. (Picture: Google)

Google recently rolled out an automatic delete feature for new users, the feature deletes user data every eighteen months unless users change the settings as per their preference. This data will include the user's location history, web, and app activity. Now, Google is rolling out new controls for smart features that will give the ability to users to turn them off. Smart features in Gmail include automatic email filtering, tabbed inbox, summary cards above emails, Smart Compose, and Smart Reply that essentially give suggestions to users before they type out the entire message.

All these features are aimed at the convenience of users but they use significant amounts of data. Google will roll out a toggle that users can turn off if they do not rely on the features. They can also turn it back on anytime.

"The ability to turn on (or not) some of these individual smart features is not new. What's new is a clearer choice over the data processing that makes them possible. This new setting is designed to reduce the work of understanding and managing that process, in view of what we've learned from user experience research and regulators' emphasis on comprehensible, actionable user choices over data," Google in a blog post said.

Turning off the toggle will also limit the user's access to personalising data on Gmail, Chat, and Meet. If a user personalises this data, they get reminders from Google Assistant for bills, the option to view restaurant reservations in Maps, and loyalty cards & tickets for Google Pay.

Earlier this week Google announced that starting June 21, 2021, Google will no longer offer unlimited free photo backup from June 2021. However, any high-quality picture or video that will be uploaded before June 21, 2021, will not be counted towards your 15GB of free storage. The photos that are backed up before June 21 will be considered free and will be exempted from the storage limit.