Google has created a new virtual game within Google Pay which encourages users to virtually visit 30 Indian cities and earn some real rewards worth up to Rs 501, hoping that rewards will make users keep coming for more. 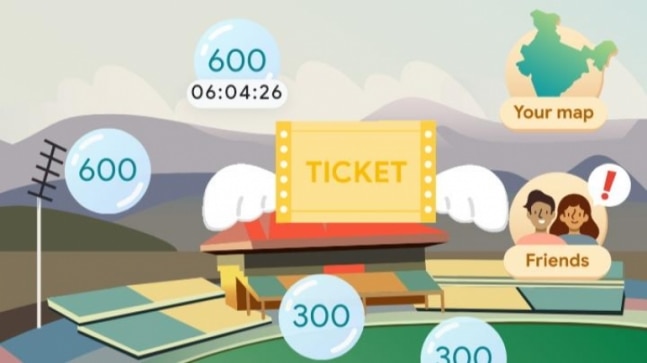 Countless Google Pay users are busy staring at their phone screens nowadays. They are playing Go India, a game Google has created, trying to win tickets to one of the 30 cities that are part of this virtual travel game. Once they get the tickets, they stand to win anything between Rs 101 to Rs 501.

Google Pay India recently rolled out its virtual game Go India through which users can earn real money and rewards. And as it happens with these games, they are not only trying to get the tickets on their own, but are also busy friends, family members and even strangers if anyone would care to share a virtual ticket to them so that they can complete their collection and be crowned as the 'Go India Champion', as the platform puts it.

The Go India game arrives just when Facebook has introduced WhatsApp Pay in the country. And with this game Google is probably hoping to make the Google Pay experience more sticky for users. It seems to be working for now.

Yash Khandelwal, a portfolio manager who indulged in playing the game says, "It is fun and is a good activity to increase the consumer interaction with the platform. It is easy to start with but the difficulty faced to complete the game made it interesting."

So, how does the game work? As soon as you open Google Pay, a question pops up, "Looking for city tickets on Go India? Pay your DTH & bills to collect city tickets to complete your journey."

As users make transactions or offer referrals, the app rewards them with tickets. The idea for them is to collect all 30 tickets named for 30 Indian cities. The Go India game is available until December 26. A payment of atleast Rs 30 or more has to be made via the platform to earn a ticket.

This is not the first time Google Pay India has brought in a game for users. Last year, the Google Pay app introduced a Diwali offer that required users to collect stamps. The offer included the users to get a gift of Rs 251 if they successfully managed to collect all the 5 stamps on the platform. While some stamps like the Diya, flower, or lantern were easy to get, the rangoli stamp was the most difficult to get hold of. The same is the case with Google Pay's Go India game which has some tickets that are too difficult to get hold of.

Google Pay also gives its users scratch cards after some transactions. These scratch cards again give users rewards, in the form of money or coupons. While some users only have "Better luck next time" written in their destiny (read: scratch cards), Anil Sharma, who is not yet playing Go India, recently game has received over Rs 1400 just by scratching cards after transactions.

"I never really felt the need to play the game. I honestly felt it was time-consuming and the reward's upper limit was Rs 500 which did not make it worth it. I have won Rs 739 and Rs 754 just by scratching cards after transactions. If you are lucky, you will not have to go through the hassle of asking for tickets and kilometres," says Anil.

Apple's iOS 14 privacy prompts now rolling out in India, here is what it means for you