Google's AirDrop rival confirmed to launch soon: This is how it will work

Google has confirmed it is working on Nearby Share and it is available in the beta versions to some users already. 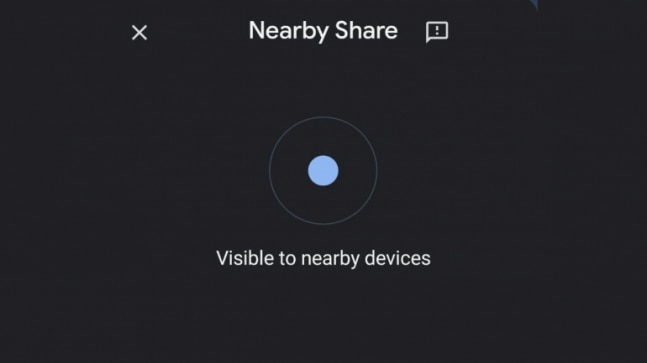 Nearby Share feature as seen on Android 10 (Source: Android Police)

Google's answer to Apple's popular file-sharing tool AirDrop is coming through soon. After months of rumours, Google has finally confirmed that the Nearby Share feature for Android devices is under development. The feature will allow Android phones to exchange files wirelessly, much like how Apple allows iPhone, iPad, and Mac to exchange files seamlessly using AirDrop over a wireless connection. The Nearby Share feature is expected to arrive later this year, probably with the release of Android 11.

Folks at Android Police managed to get their hands on the Nearby Share feature in its beta stage, which has limited functionalities for now. The feature is rolling out via Play Services Beta on eligible handsets and is up for testing. It will allow the transfer of files of any format, but its functionalities are said to appear differently depending on the content being shared. Besides appearing as an app in the share list for a file, the Nearby feature will show up as a prompt for when a file is previewed. The latter was spotted in an Android 11 video leak, reports Android Police.

The Nearby Share seems to be working on Pixel 4 XL and Pixel 3a devices running Android 10, but how it looks on a device could change with Android version. This means that Android 11 may have a slightly compact version of Nearby Share feature to minimise the visual clutter.

If it is used for the first time, the user needs to set up the feature by entering the default device name and configure visibility settings -- both of which can be changed anytime. The visibility settings include All Contacts, Some Contacts, and Hidden, much like what AirDrop has. But there is an option to send files to anyone who is not in the contacts list, as well. Visibility can also be changed using the toggle in Quick Settings.

When in use, the Nearby Share begins to scan for proximate devices for file sharing. There is a cross icon on top to end sharing files, along with the profile photo icon to dive into Nearby Share settings. The settings also include the option to customise what mechanism the feature should use when transferring files. For small files, a mobile connection can be used. There are also Wi-Fi and offline sharing available as options.

The recipient needs to accept the approval before Nearby Share transfer files to their device. This would stop people from misusing the feature by blasting out an objectionable photo to a stranger's device that is in proximity. Moreover, Nearby Share will not work unless it has been set up on a device, irrespective of its availability on the sender's side.

Google's Nearby Share feature is expected to roll out as early as Android 11 release timeline. It is not clear whether it will work only on Android 11 or it will reach devices running Android version 10 or lower.

Zomato Gold is now Zomato Pro: Here is everything you need to know