The DoT has cited national interest and public interest as the reasons for banning the website. 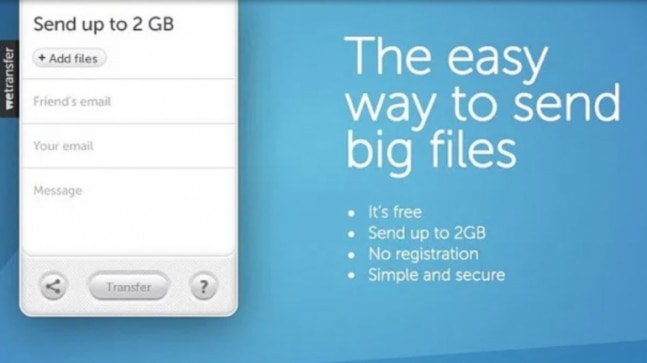 The Department of Telecommunications (DoT) has banned the popular file-sharing site WeTransfer.com. The DoT has cited national interest and public interest as the reasons for doing so.

According to a news report by Mumbai Mirror, DoT issued a notice to internet service providers across the country to ban three URLs. The first two notices asked to ban two specific URLs on the website whereas the third notice was to ban the entire WeTransfer website.

WeTransfer is a popular file sharing website on the web. It has millions of users across the world but the company has garnered higher popularity in India during the ongoing lockdown days. The website allows users to send files to up to 2GB straight to the recipient's email without the need to create a separate account for it. While the paid plan allows file-transfer of higher capacities, most of the users' job is done by the free plan. After the ease of use, this is the second reason why the website has become so popular in the country.

It is unclear as to why the government has banned the website and what exactly did it find objectionable on the page but for now most of the leading ISPs have blocked the access of WeTransfer for their users.

Bans in India aren't new. Many websites have been banned in India. In fact in one of the Lok Sabha session of 2019, the ministry of information and technology showed that there had been a 442 per cent rise in the number of URLs blocked in India. These URLs have either been found malware, or encouraging pornography of any kind or a threat to national security. The ban applies to the entire website. WeTransfer is a file-sharing website that send files from one to another and has no access to the content of the file. WeTransfer is a just a carrier and it shouldn't be banned for some content that has uploaded by its users. Yes, the site can be used for sending pornographic content as well which is the reason given by DoT but then again it is the users and not the website behind it.