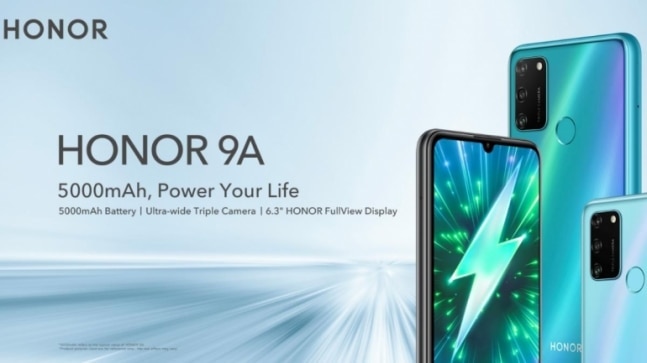 Honor 9A specifications and camera

Honor 9A features a 6.3-inch display with a waterdrop notch. The phone is powered by MediaTek Helio P22 SoC paired with 3GB of RAM and 64GB of storage which can be expanded via a microSD card up to 512GB.

The Honor 9A houses a massive 5000mAh battery and the company claims that on a single charge it can supports up to 33 hours of 4G calls, up to 35 hours of video playback and up to 37 hours of FM radio playback. The phone is pretty lightweight and flaunts a sleek and ultra-slim design.

The MagicBook 14 by Honor as the name suggests is a portable laptop that features a 14-inch display Full View display. The laptop is powered by AMD's Ryzen 5 3500U CPU coupled with 8GB of RAM, and a 256GB PCIe SSD storage. The Magicbook would include a 12-month subscription of Microsoft 365 Personal. The device would be available for pre-order in the UK, France, and Germany for 649.90 at hihonor.com.

Honor unveiled a new range of audio devices on Tuesday in Europe. The Choice True Wireless Earbuds comes with over 24-hour battery life. The earbuds feature a 7mm composite diaphragm speaker that aims to deliver decent sound quality. It also reduces noise from the surroundings during calls or while listening to music. With up to 24 hours of superior battery life[4], the earbuds can easily last for a day's worth of calls and music playback, the company claims.

Asus ROG Phone 3 is coming soon: Here's what we know about it so far