All three products will be making their way to Indian shores today after having being launched globally. 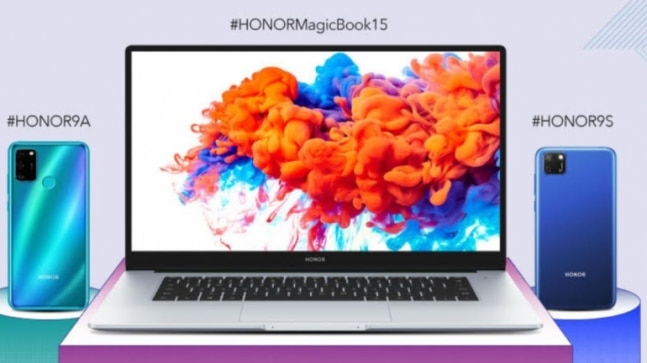 Honor is all set to launch two new smartphones and a laptop in India today. Honor 9A, Honor 9S, and Honor MagicBook 15, are set to be three new products that will be made official by the company at an event later today.

Of the two, the Honor 9A and Honor 9S will be new affordable smartphones, while the MagicBook 15 will represent the company's entry into the notebook market in India. All three products will be making their way to Indian shores after having being launched globally.

Honor has announced that the launch of the products will take place at 2pm, with the event also being livestreamed through Honor India's Facebook account and YouTube channel. For those interested in watching the event live, the link to the livestream can be found below.

The Honor 9A brings a 6.3-inch IPS LCD with HD resolution. Instead of a punch-hole, we have a water-drop notch at the top for the front camera which houses an 8-megapixel unit. At the back, there's a 13-megapixel main camera, 5-megapixel macro camera, and a 2-megapixel depth sensor.

Under the hood, there's a MediaTek MT6762R processor paired with 3GB of RAM and 64GB of storage. On the software side of things, the device runs on the Android 10 OS with Magic UI 3.1. The smartphone features a massive 5000mAh battery that can be charged through a MicroUSB port. Connectivity options include dual-SIM 4G, W-Fi, and Bluetooth v5.0. The phone is available in Russia for RUB 10,990 (Approximately Rs 11,000).

The Honor 9S' cameras include an 8-megapixel rear camera and a 5-megapixel front camera. The device packs a 3020mAh battery, MicroUSB port, dual-SIM 4G, Wi-Fi, and Bluetooth v5.0. This affordable phone has been launched in Russia for RUB 6,990 (Approximately Rs 7,000).

Honor MagicBook 15 features a 15.6-inch display with a resolution of 1920x1080 pixels. It will be powered by an AMD Ryzen 5 processor coupled with 8GB of RAM and 256GB of SSD storage. For connectivity, it has 3 USB ports including the USB 2.0, USB 3.0, and USB 3.1 along with HDMI port, Headphones, and Mic jacks. The laptop was launched in China on July 17 for CNY 3,599 (roughly 38,600). It is available in Glacial Silver and Starry Sky Grey color options.