How are the salaries for Indian IT engineers? Probably too high, tweets an industry veteran as he says that employees now prefer cash to stock options and often switch jobs frequently. There is a saying - never ask a man his salary. But how about revealing it on Twitter. Deepak Abbot, an industry veteran and founder of India Gold, which allows users to get loans against gold through an app, has recently sparked a debate about the salaries of Indian IT engineers with a tweet. In his tweet, which has attracted reactions from several groups of people, Abbot says that it is getting difficult to hire and retain good Indian IT engineers because the salaries are now too high and job offers plenty.

In his tweet, Abbot also says that this situation has made it difficult for startups to hire Indian IT engineers because unlike earlier when engineers could be attracted to a job and retained through stock options (ESOPs) now they prefer cash and often hop jobs to get salary increase in a short time.

Abott on Twitter posted a WhatsApp chat with another startup founder discussing the current state of junior and mid-level engineers and their perception on salaries. He wrote, "State of engg hiring in this short chat I had with another founder. It isn't easy to retain or hire engineers. At junior level almost no one values ESOPs, they all need cash."

The screenshot shows the two discussing the case of a couple of engineers. The person Abbot was talking to noted that recently he increased the salary of an engineer in his firm from Rs 15 lakh per annum to Rs 22 lakh and that now the same person was considering leaving because he got an offer with annual package of Rs 40 lakh. In one more instance, another engineer got a 3X raise from Rs 12 lakh to Rs 36 lakh. "Almost all of them are leaving for 1.5X-2X... Junior level all 2X. Tough hai market," notes the chat screenshot posted by Abbot.

His screenshot has set the talk going. Many who are not IT engineers noted that these salaries are way too high compared to what people in other industries get. "Massive FOMO happening. Kaash thoda aur coding padh leta college me," one Twitter user quote-tweeted what Abbot posted.

In replies, many more are in agreement with Abbot. Apparently the issue seems to be one related to startups where IT engineers that have top skills are in much demand. "Ridiculous CTC's in India. No one understands long term commitment. Been through this roller coaster, my advice (is to) keep a healthy churn, retain and reward people who believe in the long term. Because there is always the unicorn who will offer 2x everytime," noted a user in reply to Abbott. 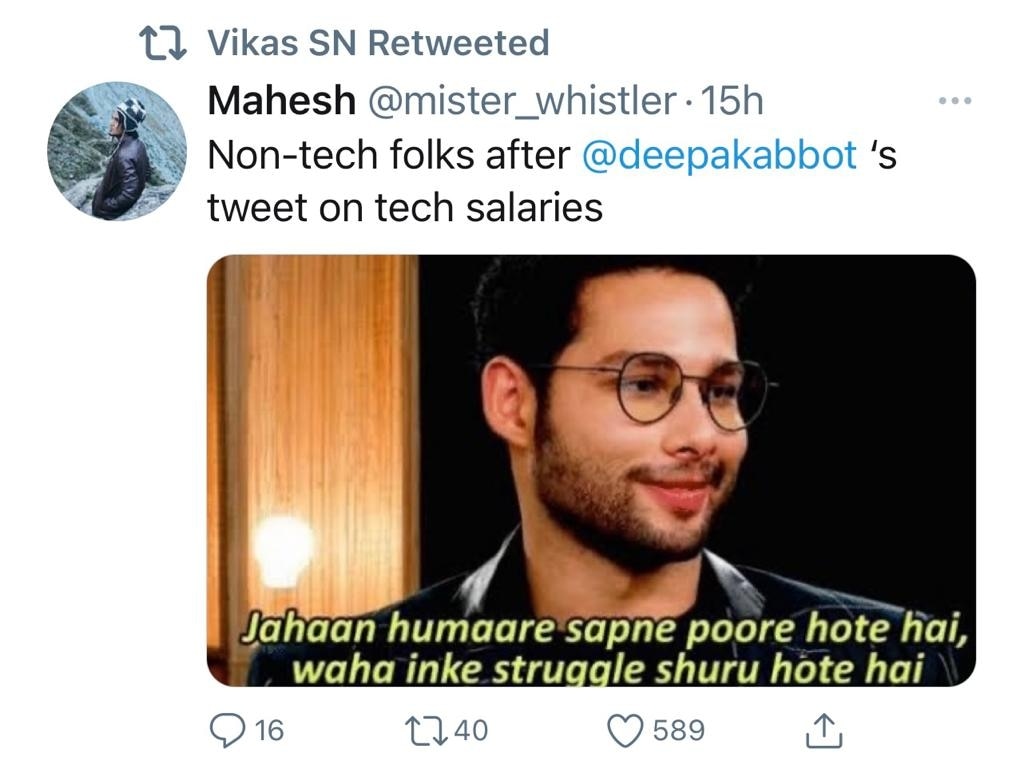 How much IT engineers earn in India

There is a possibility when Abbot highlights high-salaries he is specifically talking about the start-up scene where "rock star" engineers are in demand not only within the Indian startup ecosystem but also by startups based outside India.

"With remote work, talent can finally start looking at getting salaries compared to their global counterparts. A new normal for tech salaries for Indians is going to be established. And obviously switching can take one so far, you do hit a ceiling in that," said another Twitter user in reply to Abbott.

But exactly how much IT engineers, who are not part of the startup ecosystem, earn? Their salaries are probably lower. While there is no specific data that can be taken at face value, a quick look at Glassdoor, a website that lets people report their salaries, shows that IT engineers usually earn less than the figures discussed in the chat posted by Abbott.

Glassdoor notes that the average salary of an IT engineer in India is Rs 6,92,585 per year. Although much depends on the company where the person is working, and his or her experience level.

The average monthly base salary for an IT engineer at Google India on Glassdoor is Rs 9,68,926 on the basis of 3 people who reported their salaries. Depending on the experience, it ranges between Rs 6,81,720 to Rs 28,89,579. For Tata Consultancy Services there are 22 reports on the website and they note that the average salary for an engineer is around Rs 5,00,000 per year. Similarly, the average salary of an engineer at Ericsson in India is around Rs 5,62,041. For Cisco India there are records of 68 employees with an average salary of Rs 11,40,017.

In the self-report section on the Glassdoor, we see that there are many mid-level and junior IT engineers in India who are earning between Rs 5 lakh to Rs 20 lakh per annum.

Although these salaries are not as high as what Abbot's tweet implies, these are still quite high compared to average remuneration in India. According to a research by a website called Picodi.com in 2020, India had an average household income of Rs 3,93,600 per annum. So, an IT engineer with an annual compensation of Rs 40 lakh effectively earns 10X then what an average Indian household will earn in a year.

ALSO READ: | Teen, lured by cheap iPhone listing, ends up buying table instead of real iPhone from e-com site
ALSO READ: | Micromax In 1 goes on sale today for Rs 9,999, should you buy this Made in India smartphone?
ALSO READ: | Moto G100 launched with Snapdragon 870 SoC: Price, specifications and features