Huawei's next phone could be a foldable flip phone similar to Samsung Galaxy Z Flip. 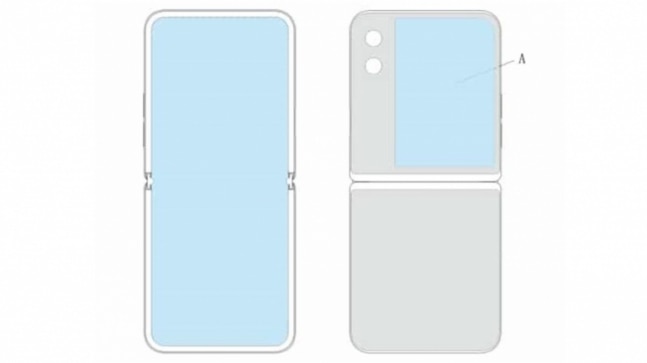 As per some leaks coming in, now Huawei's next phone could be a foldable flip phone similar to Samsung Galaxy Z Flip. First noted by Tiger Mobiles, the new patent reveals that Huawei is planning to include a secondary display on the outside of its clamshell foldable phone. The secondary display on Huawei's rumoured flip phone could be larger in size when compared to Galaxy Z Flip smartphone that was launched early this year.

Tiger Mobiles reported that Huawei published a patent with the Chinese Patent Office aka China National Intellectual Property Administration (CNIPA). The rough sketches that have been leaked of Huawei's foldable phone shows a large display on the outside with two side holes which could be the dual rear cameras.

The frame of the foldable phone holds some buttons which can possibly be the volume rocker and the power button. The rough sketch of the phone when it is not folded doesn't reveal anything. It simply shows that the phone is binded with a hinge. This could mean that the company will either exclude a front-facing camera, or may opt for an under-display camera.

If we do believe the latest leaks, it shows that Huawei is planning to come up with a clamshell foldable flip phone. And from a smartphone maker like Huawei, it doesn't come as a surprise that they want to try their hands on a foldable phone this time. After all companies like Samsung and Motorola have already launched second-gen foldable phones.

ALSO READ | Flipkart and Amazon gear up for second round of sale and deals, announce new offers
ALSO READ | Google removes 3 popular apps from Play Store that were collecting data of kids, here are all details
ALSO READ | Facebook may face antitrust charges from the US
TweetYoutube
Tags: Huawei

Flipkart and Amazon gear up for second round of sale and deals, announce new offers