Hong Kong-smartphone maker Infinix is all set to foray into the TV market by launching new Smart TVs in India. 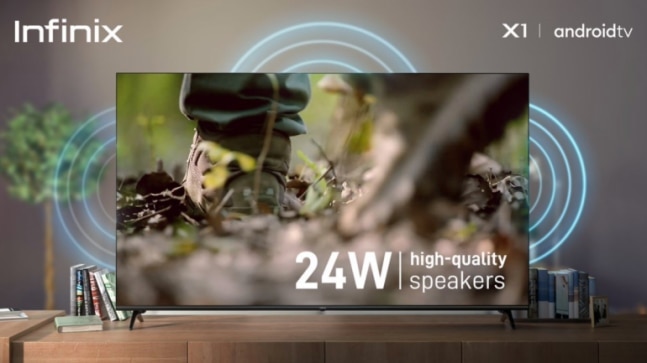 Hong Kong-smartphone maker Infinix is all set to foray into the TV market by launching new Smart TVs in India. The company had briefly listed the smart TV on Flipkart which goes by the name X1. However, the listing has now been removed by the company. Infinix had earlier confirmed launching Smart TVs along with a Snokor Soundbar in India.

As per reports, the Infinix Smart TV will be released in two screen sizes including the 32-inch and 43-inch. Smart TVs have already been launched in Kenya. The TV sports a frameless design runs on Android 9.0 comes with support for Dolby Audio. It is powered by a 64-bit processor and has major apps like YouTube, Netflix, and Prime Video pre-installed. The X1 has an internal RAM of 1GB and 8GB ROM. Infinix has not made the smart TV official in India yet so the specifications may not be the same as the variant launched in Kenya.

By launching TVs in India, Infinix will compete with the likes of Mi TV, Realme TV, Vu, TCL, and other brands that sell affordable smart TVs. Along with the TV, Infinix could also unveil a soundbar under the Snokor sub-brand. Infinix has unveiled audio products in India before but those have been TWS earbuds and wired earphones mainly. It has not unveiled a speaker so far in India.

Infinix on Thursday unveiled its Zero 8i in India for Rs 14,999. The smartphone is quite a looker with its design inspired by the art museum Louvre in Paris.

The Infinix Zero 8i sports a 6.85-inch FHD+ Dual Pin Hole with a 90.1 percent screen-to-body ratio and 480 nits brightness. It also comes with a high refresh rate 90hz refresh rate. The smartphone is powered by MediaTek Helio G90T 64 bit Octa-core processor with 12nm FinFET and backed by ARM Mali G70 GPU and coupled with 8GB RAM.

In the camera department, the Infinix Zero 8i features a quad-camera setup on the rear. The camera island comprises a 48-megapixel primary sensor, 8-megapixel ultra-wide-angle sensor, a 2-megapixel depth sensor, and another AI sensor, and four LED flashlights. On the front, there are dual-cameras on the front which include 16-megapixel + 8-megapixel sensors for selfies. ZERO 8i uses a unique Ultra-steady Video mode backed by Gyroscope + EIS 3.0 algorithm combined with an advanced Vidhance video stabilization solution.
For battery, Infinix Zero 8i houses a 4500mAh battery with support for a fast charger. The smartphone comes in a single 8GB+128GB variant.