Instagram Reels to go live for users in India: Here's how you can create a reel

Users can now create 15-second videos or reels on Instagram to which they can add various effects, filters, and audios and share them with followers on their feed. 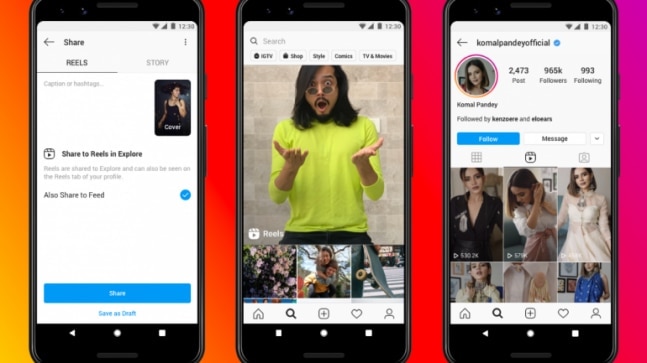 The ban of video-making app TikTok in India made way for many short-video apps. Now, Instagram intends to bring respite for content creators with its short-video format Reels. Reels will be going live on Wednesday, at 7:30 pm IST for users.

Users can create 15-second videos to which they can add various effects, filters, and audios and share them with followers on their feed. In case the user's account is public, they can share it under the new section in Explore to reach a wider audience.

According to Instagram, more than 50 per cent of user accounts on the platform globally visit the Explore section. The Explore section shows public posts. Now with Reels coming into the picture, short-videos will get visibility as well given that the user's account is public.

"With Reels, people can express themselves while entertaining others, whether that's by trying out a fun new dance or spreading the message on something they care about," Instagram said in a statement.

Ajit Mohan, Vice President, and Managing Director, Facebook India, said, "People across the big and small cities of India come to Instagram to express themselves safely, and also to be entertained. With Reels, we're unveiling the future of entertainment on the platform, in a way that ignites creativity. With the multiple creative formats, whichever way you want to express yourself, it can now be on Instagram."

India is the fourth country where Instagram is testing Reels after Brazil, Germany, and France.

Users can create their Reels by following these steps:

--Select Reels at the bottom of the Instagram camera.

--The Reels can be edited using tools on the left side of the screen.

Audio and AR effects: Instagram users can select songs from the Instagram music library. They can also record their original audio while recording a reel with it. Instagram also has an array of virtual effects created by Instagram and users all over the world. Users can record multiple videos with these effects.

Timer and Countdown: Users can record Reel hands-free by setting the timer.

Alignment: Users can line up objects from multiple clips before recording the next. This helps for seamless transitions like outfit changes or adding new friends into your reel.

Speed: Users can choose to speed up or slow down part of the video or audio to stay on a beat or make slow-motion videos.

Once the Reel is created, it can be shared on Insta stories privately or publicly where it will be visible for 24 hours, or if users have a public account and want to reach a wider audience, they can do so through Explore.

Users can share a reel by following these steps:

Public Account: Users can share their reel to a dedicated space in Explore, where it has the chance to be seen and discovered by the wider Instagram community. Users can also post reels on their feed. To increase visibility, users can share reels featuring certain songs, hashtags, or effects. These dedicated pages will show those reels whenever someone clicks on that song, hashtag, or effect.