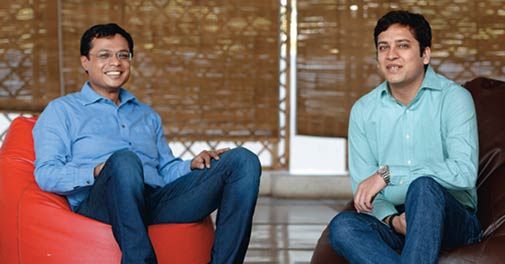 Increasing Internet penetration and youngsters shopping online has helped homegrown e-commerce major Flipkart hit an annualised sales run rate of $one billion (over Rs 6,100 crore) -- a year ahead of its target.

The company was aiming to reach the billion dollar-mark (for gross merchandize value or GMV) by 2015.

"In March 2011, we announced that by 2015, we wanted to hit $1 billion in GMV. At that point in time, our run rate was USD 10 million. Today, we are really proud and excited to announce that we have hit a run rate of $1 billion GMV one year before our target," Flipkart co-founders Sachin Bansal and Binny Bansal in a statement.

Flipkart had started as an online bookstore and now sells products across categories like fashion and electronics.

It is also beginning to enter areas like white goods and furniture.

It also operates under the marketplace model under which it allows retailers to offer their products on their platform.

The company had also raised $360 million from private equity funds last year, one of the largest deals in the e-commerce space.

"We have grown 100X in the last three years and it reinforces our position as the leader in the Indian e-commerce industry," the statement said.

Estimates suggest that India has over 200 million Internet users, of which some 20 million transact online.