Cyberphone is essentially a result of when Cybertruck married the iPhone 11 Pro. 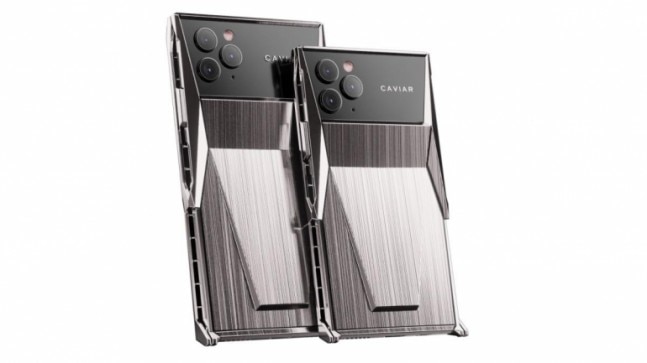 iPhone is known for its quality design, on-par user interface, but most importantly, for its premium brand quotient. Owning an iPhone is often translated as a status symbol, thanks to its pricing that is also the source for those kidney jokes. Despite that price sticker, Apple fans are buoyed up to get the latest model in the series. Capitalising on that sentiment, Russian firm Caviar has redesigned the iPhone 11 Pro to make it look like the Tesla Cybertruck. Known for its opulent take on iPhone design, Caviar is selling what seems like an amalgamation of Apple's iPhone and Tesla's Cybertruck, called the Cyberphone, for a whopping price of $15,860 (roughly Rs 11.3 lakh).

Cyberphone is essentially an iPhone 11 Pro with a redesigned outer packaging, meaning the exterior design has been tweaked to resemble the Cybertruck. Cybertruck is Tesla's latest electric vehicle that is meant to replace conventional trucks and starts at around $40,000 in the US. It garnered a flurry of jokes and memes around the design, which is a first in the product segment. The geometry of the Cybertruck is all about sharp angles and straight lines, which is what has been imitated on the Cyberphone: a rather impractical approach to the regular iPhone design.

Well, iPhone design is also getting saturated by the day. As such, the change in iPhone design sits atop the list of demands Apple loyalists make on public forums and social media. iPhone design has not undergone any radical change for a few years now, while other smartphone companies are relentlessly trying to experiment with the design of their products (pop-up cameras?).

Not only the Cyberphone reimagines what the iPhone 11 Pro looks like, but it also upgrades the material of the casing to titanium, which is premium than Apple's aluminium 7000-series alloy. Even the display of the phone is shielded by the cut-out made of titanium. But that's not the unusual part about the display. Cyberphone has a folding cover that looks like a louvre. It protects the display from breaking in case of an accidental drop and also doubles as a holder.

Cyberphone is now up for pre-orders but it will be available in limited units, 99 to be precise. So, if you want to splurge on this exorbitant iPhone 11 Pro model aka Cyberphone, you can head to the Caviar website.

Best Vodafone prepaid plans under Rs 500 for every user