Apple may be shrinking the notch on this year's iPhone and it may be a good thing. 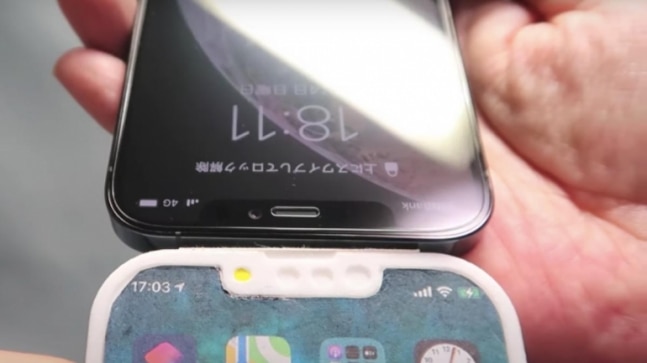 Apple introduced the notch on the iPhone X. It was met with appreciation but there was even more criticism. The notch led to a revolution in the phone industry, and it is still there on the recent iPhones. But this year, Apple may be dialling down a bit. A new mockup of the iPhone 13 shows the notch on it will be relatively smaller than the one on the iPhone 12. This mockup was created based on the leaked schematics from supply chain sources, which is why there are chances this is true.

Japanese blog Macotakara that sources information from Apple supply chain sources has shared the images of this iPhone 13 Pro dummy unit. And this mockup shows the notch of this year's iPhone will be of different dimensions from what you see on the iPhone 12 and iPhone 11. The reason why this mockup could be relevant is the information about the phone's dimensions that Apple shares with accessory makers prior to the release.

According to the report, the notch on the iPhone 13 Pro will measure 5.35mm in height while that on the iPhone 12 Pro is 5.3mm. In terms of the width, the notch on this year's iPhone will be 26.8mm as compared to 34.83mm on last year's iPhone 12 Pro. The lowering of width means Apple may finally be addressing the display design criticism with a smaller notch. The notch is an important design aspect that allows several sensors to reside on the front side of the iPhone, aiding it in carrying out Face ID requests. The notch also has an earpiece in the middle.

However, Apple is reported to move the earpiece to the bezel. This would make space for more display real estate, allowing for a smaller notch. And, interestingly, the front camera on this year's iPhone may move to the left side from the right side of the notch, the report has added. While it is not immediately clear why Apple would reposition the FaceTime camera to the opposite side, the speculation is that it would be to make adjustments for the new layout of the notch.

Notably, last year when the iPhone 12 rumours were still floating, there was huge speculation that Apple would shrink the notch on the phone. But that did not happen. Instead, the iPhone 12 series arrived with the same notch that its prequel iPhone 11 series, iPhone XS, iPhone XR, and iPhone X featured.

The new mockup does not provide extra information in terms of design, and even though it suggests the notch will get smaller, it is just speculation right now. Apple does not confirm anything until it is launching the new iPhones on the stage, so take this news with a pinch of salt.

HP Pavilion 13 review in 5 points: A balanced pricing makes it worth your money?