iQOO 7 launch soon: Specs, features, India price, and everything we know so far

After launching in China, the iQOO 7 is likely to arrive in India and could become the cheapest smartphone to offer Snapdragon 888 processor. iQOO 7 may launch in India this month

iQOO is gearing up to launch a new affordable flagship smartphone in India. This device called the iQOO 7 has already made it to China, helping us with plenty of details about this smartphone.

iQOO has been continuously teasing this device via its Twitter handle. A couple of weeks ago, the brand teased a picture of the Snapdragon 888 with the price tag of Rs 3X990, so it's safe to predict that the smartphone will be priced under Rs 40,000 in India.

Now that the smartphone is expected to go official this month, we decided to stack up everything we know about the iQOO 7.

--The iQOO 7 is being offered in three different finishes, with one designed in partnership with BMW M Motorsport. Looking at the pictures, the design of the iQOO 7 doesn't seem fresh. It features a square camera module with a triple camera setup and a flash that's stacked in the module itself.

--There's a centred punch-hole display with minimal bezels on top and both sides on the front, but there's a little chin on the bottom, though. 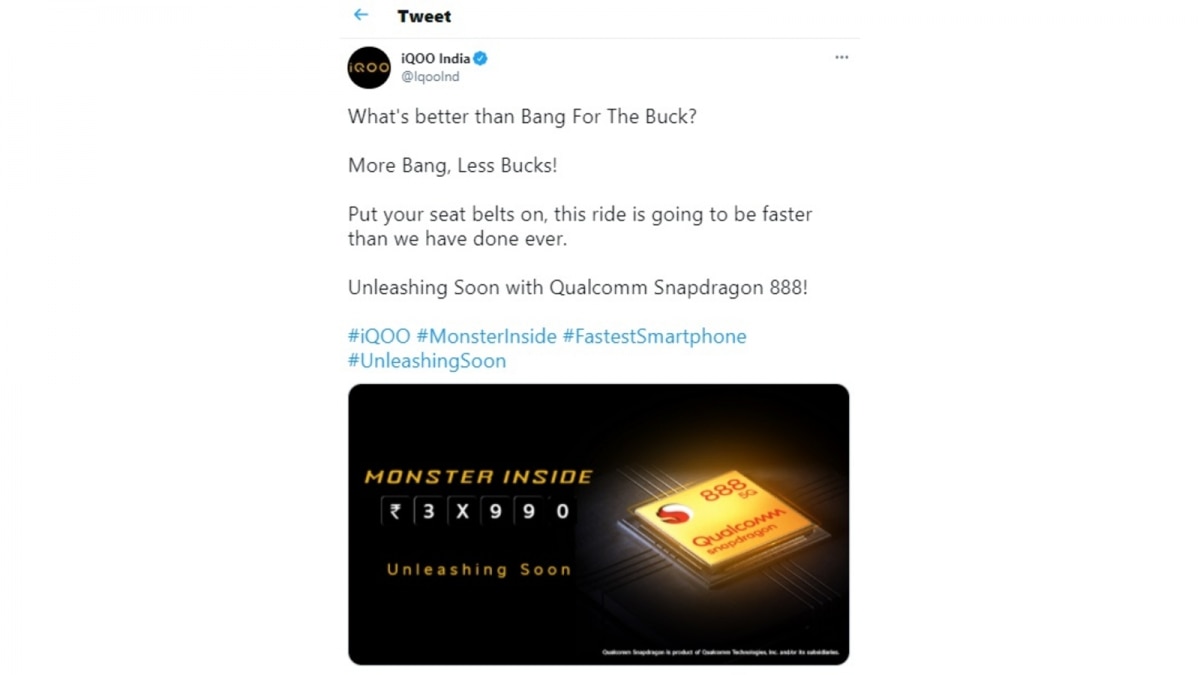 --The iQOO 7 will be powered by Qualcomm's flagship Snapdragon 888 chipset, which powers flagship devices like the OnePlus 9, Vivo X60 Pro+, Redmi K40 Pro, Asus ROG 5 and more. For your information, it is an octa-core chipset clocked built on a 5nm manufacturing process. This chipset is clocked at 2.84GHz and supports both 5G and WiFi 6 bands.

--In the camera department, the iQOO 7 is powered by a triple rear camera setup that consists of a 48-megapixel primary sensor, a 13-megapixel ultra-wide shooter and finally, a 13-megapixel portrait camera. On the front, there's a 16-megapixel camera for selfies.

--The iQOO 7 will be running Android 11 with Origin OS on top. Apart from this, the connectivity options on the device include 5G, 4G VoLTE, Bluetooth v5.2, GPS/ A-GPS, NFC, and a USB Type-C port.

--It also features an in-display fingerprint scanner for authentication. Finally, the iQOO 7 is powered by a 4000mAh battery to support a whopping 120W fast charging.

The iQOO 7 arrived in China in January this year. Now the brand is all set to launch the smartphone in India. iQOO India has been teasing this device for a while, and recent reports suggest that the smartphone will be released this month. We don't have the exact launch date as of yet.

iQOO India's Twitter handle already gave hints about the pricing of this particular device. As per the post, the iQOO 7 will be priced under Rs 40000 in India. At this price, iQOO 7 could be the cheapest smartphone to be powered by a Snapdragon 888 SoC and a great competitor to devices like the OnePlus 9, Vivo X60 Pro, Asus ROG 5 Phone and more.

Realme X7 Pro, X7, and Narzo 30 Pro prices cut by up to Rs 2,000 in Realme's online sale
Data of 533 million Facebook users leaked online, here is how you can check if you are safe
Google Pixel 6 launch: Specs, features, design, India price, and everything we know so far

Moto G10 Power gets a discount of Rs 500 on Flipkart, should you buy it?