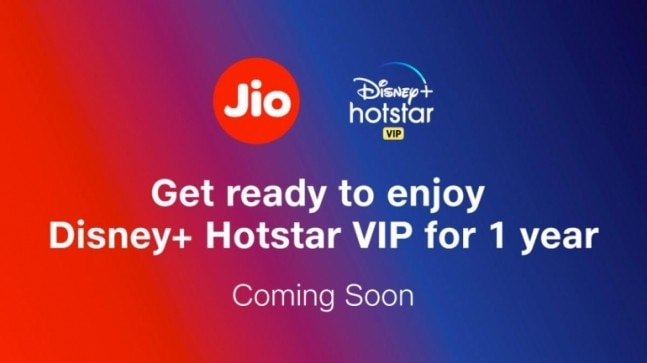 Disney+ Hotstar will soon be available to access as a complimentary service to Jio customers. Reliance Jio has put up what looks like a teaser to the upcoming bundle that will bring the recently updated streaming service for one year without charges. The teaser says Jio customers will be able to "enjoy Disney+ Hotstar" VIP subscription for one year, which normally costs Rs 399 annually. Although, the Mukesh Ambani-owned telecom company has not revealed when the offer will go live for customers.

Other specifics such as customer eligibility on the basis of their prepaid or postpaid connection has not been revealed. The teaser just says "Coming Soon", spotted by OnlyTech first. Moreover, Jio has also not said anything on whether there will be separate recharge plans for availing the free Disney+ Hotstar service. Jio has, however, confirmed that only the VIP subscription will be available to customers as and when the remaining details are out. Reliance Jio will not offer the Disney+ Hotstar Premium subscription to its customers as a complimentary service, at least initially.

This is not the first time Jio is bundling streaming services with its prepaid plans to gain more customers and retain the existing ones. It has, in the past, partnered streaming services to offer their catalogue as a part of recharge plans. Jio already offers limited Disney content on the JioCinema app, as a part of the deal signed between the two conglomerates in 2018. JioCinema provides the Disney catalogue in both English and Hindi audio, but if Disney+ Hotstar comes into the picture, customers will have a better option and a wider catalogue.

The Disney+ Hotstar VIP subscription provides customers with premieres of Indian TV shows telecasted on Star India channels at 6 pm daily -- ahead of the TV premiere, live sports mainly in popular categories such as cricket, football, live news channels, and finally, Disney content that has been dubbed in Hindi. The Premium subscription, on the other hand, provides English-language content in addition to what is available under the VIP subscription.

The move by Reliance Jio is likely to add more competition against the telco's rival Airtel. Both Jio and Airtel have their own live TV services - JioTV and Airtel Xstream - offering a lot of exclusive and English content already. A renewed effort of Jio to lure more customers will hamper Airtel's kitty of services that would not have enough for customers.

Jio subscribers to get Disney+ Hotstar free for one year

Mitron may find its place back on Play Store, chances thin for Remove Chinese Apps, Google clarifies why it removed apps