The app, which recently came under the radar for leaking sensitive information of users, has featured among the top free apps in India on App Store. 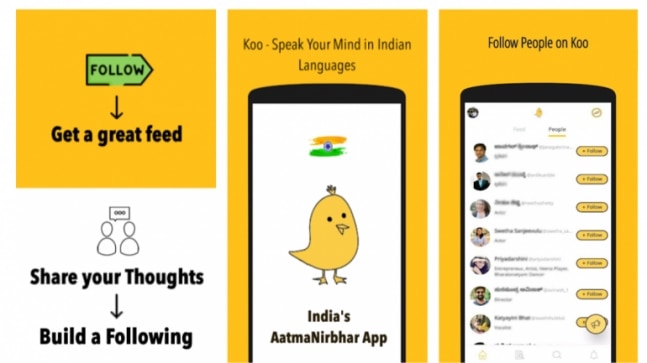 Indian alternative to Twitter, Koo, is getting increasingly popular among the users in the country. The app, which recently came under the radar for leaking sensitive information of users, has featured among the top free apps in India on App Store. Koo claims to be an AatmaNirbhar App and won the AatmaNirbhar App Innovation Challenge held by the Government of India in August 2020.

Koo gained traction after the Indian government locked horns with Twitter over the suspension of a few accounts. As per the Google Play Store, Koo has garnered over 1,000,000+ in such a short span. It is available for download on both Apple App Store and Google Play Store. Prominent personalities including Sadhguru, Ravi Shankar Prasad, Anil Kumble, Javagal Srinath, etc have migrated to Koo to express their opinion.

However, soon after Koo's popularity surged, a security researcher who goes by the name of Eliot Anderson unearthed vulnerabilities on the app. He discovered that the app shares the personal information of users including phone number, email id, gender, marital status. But Koo alleged that the allegations by the security researcher were false as no personal data was leaked. "Users enter their profile data on the app to be shared with others on the platform. That's what's displayed everywhere across the platform. While there have been false allegations of a data leak, it's just commonly called the public profile page for all users to view!" Koo said in a statement.

Apart from the data leaks, Koo's alleged links with Chinese investors were also dugout as the company claimed to be an "aatmannirbhar app". It was discovered that Shunwei had a small investment in the company. Connected to Xiaomi, Shunwei is a venture capital fund, which invests in startups. However, the company refuted the claims and said, "Koo takes pride in being an Indian company with Indian founders and in being registered here. The recent investment in Bombinate Technologies Koo's parent company was by Mohandas Pai of 3one4 Capital, an Indian investor. Shunwei, a single-digit shareholder that had invested in Vokal, another start-up of ours which answers user questions in Indian languages, will be exiting fully. Bombinate is the parent company of Vokal and Koo."

It was also discovered that a fake profile was impersonating as the official account of Koo on Twitter. The fake Koo handle was managing the social media game and thanking popular figures for joining the app on the behalf of the company. Later, Koo co-founder and CEO Aprameya came forward on Twitter and shared the official Twitter handle of Koo with users. He wrote, "@kooindia is the official handle for #Kooapp. @KooAppOfficial is impersonating and is fake. Please follow the only @kooindia." Twitter has now suspended the fake Koo handle.

This could be our first look at Xiaomi's Mi 11 Ultra

Affordable data and talktime plans from Airtel, BSNL, Jio and Vi under Rs 100