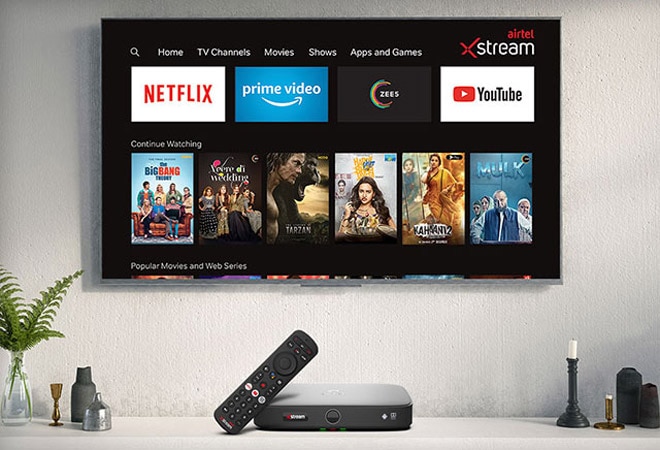 Amidst stiff competition, Airtel too has revised its broadband offering. The new Airtel Xstream Bundle plan will include Airtel Xstream Fiber with speeds up to 1 Gbps along with unlimited data, Airtel Xstream Android 4K TV Box and access to OTT content. The Airtel Xstream bundle will available to home customers starting September 7, 2020.

With the new plans starting at Rs 499, there won't be any data limit. In Rs 499 plan, the user will get unlimited data at 40Mbps, whereas for Rs 799, Rs 999, Rs 1499 and Rs 3,999, the data speeds would be 100Mbps, 200Mbps, 300Mbps and 1Gbps, respectively. Airtel says that all the plans will include Airtel Xstream 4k TV Box along with 10,000+ movies, shows and original series from 7 OTT apps and 5 Studios. Rs 999 plan upwards will also include Disney+ Hotstar, Amazon Prime Video, ZEE5. The fine prints include a fully refundable security deposit of Rs 1,500 for Airtel Xstream Hybrid 4K TV Box.

Airtel says that all Airtel Xstream Fiber plans will now include the Airtel Xstream Box worth Rs 3,999. The Xstream Box can make any TV a smart TV. Users will get access to all LIVE TV channels along with video streaming apps, eliminating the need for multiple entertainment devices at home. This Android 9.0 powered smart box comes with an intelligent remote supported by Google Assistant voice search, access to thousands of apps on Playstore and also offers online gaming.

"Customers are increasingly spending more time online be it education, work or entertainment. And Entertainment is the space where we see an exciting opportunity. Airtel Xstream is India's premier entertainment platform that brings the best of entertainment along with unlimited high-speed broadband connectivity into a single solution. To drive penetration of this exciting innovation we are today making our plans even more accessible for customers," says, Sunil Taldar, Director - Homes, Bharti Airtel.

This initiative will help drive the penetration of home broadband users even further. With over 2.5 million broadband customers, Airtel says that all for the existing customers will be auto-upgraded to unlimited.