Apple says the new purple finish is just in time for spring, and adds another bright and fun option to the line-up. The new variant will be available for pre-order beginning April 23 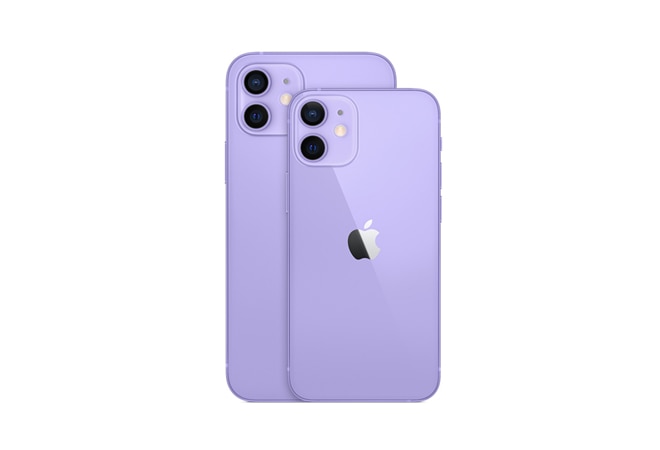 In a surprise new announcement, Cupertino giant Apple has introduced a new purple finish for the iPhone 12 and iPhone 12 mini. Launched in October last year, Apple's iPhone 12 series has been popular amongst iPhone users.

Just like the iPhone 12 and iPhone 12 mini available in blue, green, black, white, and red, even the new purple variant  will be available in 64GB, 128GB, and 256GB models starting at Rs 79,900 and Rs 69,900. The new variant will be available for pre-order beginning April 23 and will go on sale starting April 30 in China, Japan, the UK, the US, and more than 30 other countries including India.

Apple says the new purple finish is just in time for spring, and adds another bright and fun option to the line-up. Greg Joswiak, Apple's senior vice president of Worldwide Marketing says, "This gorgeous new colour joins the iPhone 12 and iPhone 12 mini family, which is available in five other stunning finishes, and features an advanced dual-camera system, Super Retina XDR display, improved durability, A14 Bionic - the fastest chip ever in a smartphone - great battery life, and the best 5G experience on any smartphone."

The iPhone 12 features a 6.1-inch display whereas the iPhone 12 mini comes with a 5.4-inch display. Both the phones boast a flat-edge design, crafted with an aerospace-grade aluminium enclosure and combined with the Ceramic Shield front cover. Apple claims that the Ceramic Shield front cover goes beyond glass by adding a new high-temperature crystallisation step that grows nano-ceramic crystals within the glass matrix, increases drop performance by 4x. It has an IP68 rating for water resistance up to 6 meters for up to 30 minutes, and is protected against everyday spills, including coffee and soda. It features the Ultra-Wide camera and a new Wide camera with an f/1.6 aperture. Claiming to be the fastest yet on iPhone, the new setup is said to provide 27 per cent more light for even low-light photos and videos. Using computational photography, Night mode and Deep Fusion, are available on Wide and Ultra-wide cameras. iPhone 12 features the first camera to shoot HDR video with Dolby Vision and is the first and only device in the world to enable an end-to-end Dolby Vision experience, allowing customers to easily capture, edit, and share cinema-grade videos natively on iPhone. Dolby Vision grading is processed live while recording, and sustained during editing, whether in the Photos app or iMovie.

Running iOS 14.5, the iPhone 12 series is powered by A14 Bionic chip built on 5-nanometer process and as per Apple claims the CPU and GPU are faster by up to 50 per cent compared to the fastest competing smartphone chips.